Posted on October 2, 2012 by tosabarbell

The event: The second annual Falls Fest Highlander in Wichita Falls, TX. As you know, we were supposed to be in Vegas while Bigg (hopefully) kicked arse at the America’s Strongest Man contest. But then his bicep blew and I thought to myself, “Well, self, I wonder if we can hit the Highlander instead?” He said yes, and I started training harder for some of the events.

The Highlander last year was a complete blast. It was my first time throwing any thing of any kind (well, I threw a yellow pages at my big brother once but it was while he was running down the stairs so I had gravity to propel the book down.) I learned a little bit but most of all knew I wanted to do more of these. It was a big treat when it looked as if going back to Texas and compete again would work out. The weather last year was very hot and windy and North Texas was in the midst of a drought. Which means that the wind blew all the dry topsoil all over the place all day. We were really hoping the weather would be different this year. Yup! It was. 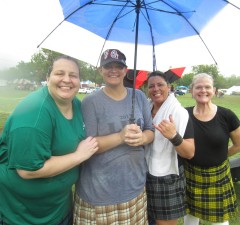 The Players: I had heard that some of the gals from last year would be back and I was excited to see them in action again. Keli (above) came last year and watched us have so much fun that she’s been throwing in games all summer. This was her first Highlander and she did awesome! I scoped out Tammy’s name on the start list and checked the NASGA site for her numbers. Holy crap this woman can throw. I knew between her and Brittney (last year’s champ and world class games competitor) I’d have a great opportunity to watch some amazing throws. As it turns out, Brittney couldn’t make it and we missed her.

There were some other novices, a gal Gant guilted into competing (and did good) and a few from a gym in Frisco. Rounding out the group was Carmen, continuing to prove that 50 is the new 30 and Sarah who took third and dazzled us all with her stone throws. So the group was set, let’s get going.

The Events: We were about an hour late getting started as we were waiting for our last girl to show up so the rest of us got a head start waiting in the rain. Heh. Actually, it was just a drizzle at this point so it wasn’t too horrible. It waited until the first event to really start pouring. Goody. 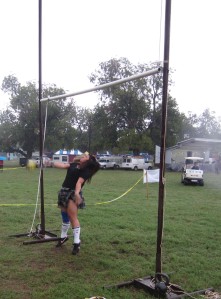 Originally, we were slated to do the WOB (Weight Over Bar) last but Keli was able to convince Gant that we should start with that. And we all owe her a hug for that. By the time we were done, the ground below the bar was a muddy mess and throwing in that after all the guys would have cut all of our numbers back considerably. Now, setting up below the bar, looking up and having the sky falling down on you is quite the experience. I started a foot lower than I was planning, hit 10′ and 11′ with no problem. My third attempt at 12′ decided to sit on the bar for about a half hour and then fall back forward. Drat!

We watched Tammy toss the weight easily over the 13′ bar and she decided to go for a PR at 14′. Ballsy. That’s Tammy. It’s pouring rain; we’ve already been in it for two hours; and you go for a PR. I knew I liked this girl already. Now, one of my biggest downfalls so far in throwing is the release. I have the strength and explosiveness to go far but I’m missing something in the release. I was trying to get a picture of Tammy’s 12′ throw, and just happened to shoot it like this, 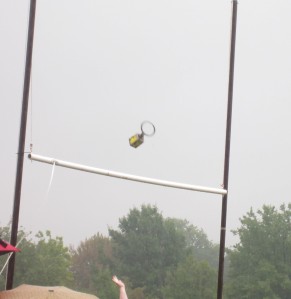 And that’s a release. I may get this blown up and put it in the gym. This, is what I aspire to.

From the WOB, we went to the open stone throw. I’ve talked about my (lack of) stone throw talents but I’ve been practicing and I’m ok with how I did. My second throw was the best but as I released it, I took a ride in the mud and fouled. No worries, I’ll keep practicing. Again, watching Tammy throw was a treat. Sarah, a former Shot Put thrower, also strutted her stuff with very solid toss’. Keli also did great as she’s learned a lot this summer in how to launch the rock. It was a quick, but fun event.

THEN, we went over to the LWFD (Light Weight for Distance.) Tammy’s first attempt was something like 49 feet. Holy shite. SRSLY? It was awesome. My last attempt went a little more than 38′ and I’ll take it. I threw 40 last month at the Scottish games and that was a PR. 38…in the rain? Happy. 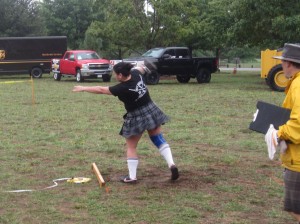 The next event, Bench for Reps, is why girls rule and boys drool. The bench had been parked in the mud all day long. All of the men who tried to push off with their feet had them sliding in said mud. So what’d we do? We moved the bench into the grass. Brilliant, eh? It helped a lot.

We warmed up to the working weight of 95 pounds and all had the distinct pleasure of benching in the rain. Cool. Or not. In theory, I was planning on 30 or so reps. My 25th was it. I was fortunate enough to be one of the last to go and the one more than Sarah and Tammy was all that was needed for a 1st. About the time we were starting on the bench, one of the pilots showed up with umbrellas and more importantly, HOT COFFEE!!!! It was truly one of the best cups of coffee I’ve ever had in my life. I passed it around and thought Sarah was going to cry she was so happy. Heh.

We quickly moved over to the platform for the Axle clean and press, got it prepped (thanks to Gant for demudding it) and started warming up the lift. There were some scary lifts on this one. We were tired; cold; wet. The bar was wet, the platform was wet, and the weights were wet. Combine that with people trying this for the first time ever and it was a recipe for disaster. Well, disaster didn’t happen, thank goodness. Here’s a good shot of the space around the platform, originally the bench was just to  our the right…in the mud.

Finally! Our last event, the Farmers Walk. The weight of the implement along with only having enough 45# plates to load, we started at 107# a hand. This proved too much for most of the group and honestly, we were wet; tired; cold; and tired. Ya, I know I said that twice. From there, we added tens and fives. We all got major ADD at this point and I have no idea how the event ended up. We were pretty busy taking pictures too, like this one: 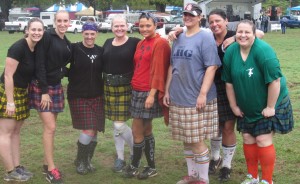 The result: The scores were incredibly close, a good reminder that bombing in one event can throw you off the podium (that’s a memo to me and the need to learn how to throw that stupid rock.) I took first by either a point or half a point, I don’t remember exactly. Tammy took second and Sarah, with just a few points behind, took third. Here we are, still smiling… 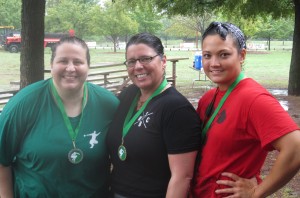 The Hero’s: Our first Hero is Gant. He organized a great event, kept things going in the chaos of the rain and having all groups flying around at the same time; and was helpful every step of the way. Next are the judges and volunteers who stood around in the rain all day for no other reason than to just be helpful. Weird. Next, is Bryan Fox. Who stood around to coach Carmen and Sarah long enough that we eventually put him to work. I would not have gotten my 25th rep on the bench without him; I would not have made my final Axle attempt without his quick cue; and none of us would have kept going on the farmer’s walk without his help in getting the implements back to the start line and tightening up the plates. On that note, Dave Nix, Tammy’s training partner from Houston, who kicked ass in his own competition during the day also got the Farmers weights back to the start line and tightened the plates after each and every time they were touched. Lastly, all the competitors, those who never gave up; who never stopped cheering for each other; who helped load each others bars; shagged weights; paid attention to where throws were marked, etc. These heavy events type games prove, again, to have the absolute best people around involved.

Personal Hero’s: of course Jeff for the coffee, the umbrellas, and the encouragement and laughs. Also holding the umbrella and coffee was key: 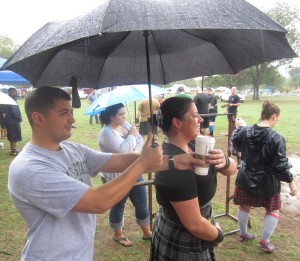 And obviously, my Bigg man. For the dry towel delivery; running to grab my sunglasses so I could bench without rain pouring into my eyes; standing in the cold rain all day a few weeks post op; his cheers; his support; his pushing me to be stronger and better; and countless other things that I won’t bore you with.  Love ya babe. 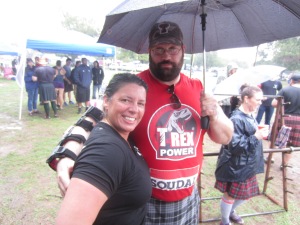 And finally…The bully! Mother nature. She tried to dampen our fun. Didn”t work. A for effort though. We’re a hearty bunch, nice try.

Final thoughts: It only took a couple of days to feel fully dry and warm again; although I didn’t feel as sore as last year, I did feel like I was moving through a fog for a day or two; and it was a blast. Again. Final thanks to everyone! We’ll see you at the next one!

For training opportunities at tosabarbell, call or text Juli at 320-296-9313. jep6095@gmail.com tosabarbell is a private, home grown gym with three lifting platforms; squat rack; prowlers; throwing implements; bars, bumpers and everything else needed for an effective strength and conditioning program. Straightforward barbell programming including the Olympic lifts; sound (read: not fancy bullshit) diet advance for weight gain or loss; and strong coaching will ensure you will meet your goals such as becoming stronger, more explosive, and better conditioned. Juli has been coaching teams and athletes for over 20 years. She grew up participating in various sports at various levels but was always drawn to those that require strength training. She is a 2-time Master's Amercian Weightlifting Champion and holds six Master's American records. She is a Master's Weightlifting National Champion and holds three National records. She is a Master's Weightlifting World Championships Silver Medalist in 2016. Juli is also a Masters Highland Games World Champion and holds three World Records in the Braemar Stone; Heavy Weight for Distance, and Light Weight for Distance in the 45-49 class. Her 5 years of training and coaching under Mark Rippetoe has honed her coaching skills to be a top choice for you to reach your strength and conditioning goals. Juli will strongly encourage tosabarbell athletes to compete (and prepare you to do so.) However; tosabarbell is also for those who just wish to be stronger and go through life feeling better. Matt WanAt is a retired Professional Strongman who competed frequently with Strongman Champions League in Europe. He played a year of D1 football with Iowa before concentrating on his Chemical Engineering degree in Iowa City. He is a native of Wauwatosa and still remains a staunch supporter of Tosa East. This blog will be a mixture of strength notes, coaching and nutrition tips, personal shit; bacon delicacies, and a whole lot of fun.
View all posts by tosabarbell →
This entry was posted in Uncategorized and tagged barbells, Heavy events, Highland Games, Highlander, strength training. Bookmark the permalink.