Posted on February 4, 2013 by tosabarbell

We’ve all seen them, the amazing squat ass pictures. They usually have some motivating/shaming caption requiring us to believe in the fact that these women who have a 45″ perfectly rounded booty and 19″ waist have literally squatted their ass on. 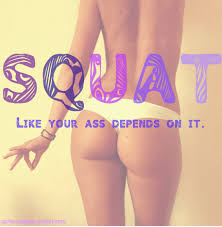 What’s wrong with this picture? Uhhhhh…no quads; no hamstrings; no nothing except a nice booty. But surly we believe that squats built dat ass, right? Cuz we’re stupid? Right?

Look, some women have nice ass’. Cuz they get one…for a while. They don’t have to train or anything, they just get a nice arse. I will be the second to admit that it looks awesome (Bigg was the first;) but it has nothing to do with squatting. So stop selling the snake oil. There are a lot of women who train, are strong and don’t end up with the body of a pin up girl. Obviously.