I believe in being gracious. In showing respect, kindness, recognizing that my little world is full of other people going through other things. I believe that people who are close to people I’m close to should be shown respect. I may not know you, I may not know you well, but someone I love cares for you and out of respect to them, I’ll show you respect.  Simple.

However, what happens when people take the graciousness you offer, and begin treating you like a door mat? 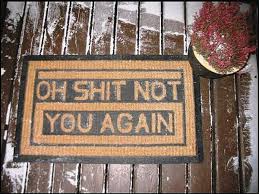 It happens, there are people who suck at life. They are takers; whose world’s are so small they believe that their views are the sun and we are put here to revolve around them. What then?

There is a gym in town I refuse to train at specifically because of the handful of men who’s mommy’s told them one too many times that they are the very most special in the world and everyone else is common. (Or maybe not, I just don’t have experience with why men grow up to be bullyish, selfish assholes.) The owner of the gym is one of the most positive, experienced, and fun men I know here in Milwaukee but his patrons are not. When I first got to town, I believed that even when grown men would come and take plates off my rack that I just spent 10 minutes setting up for my squat sets, I should be gracious. After all, this isn’t my sandbox. I’ll play nice out of respect for Matt who has trained there for years. The problem was that people behaved completely differently when Matt was with me. Now, there are some very good folks from the gym that I miss seeing on a regular basis but knowing I could be dealing with idiots during my training sessions was just stressful enough for me to stay away.

Honestly, that was new for me. I’ve trained many places and once folks see you setting up a squat rack, they show THEIR graciousness and back off. But not here, so I switched gyms when I needed some accessory work that I couldn’t do in our home gym. It finally occurred to me that just because an environment or people are good to (or for) Matt, they may not be for me.

And that’s the crux of being plopped down in someone else’s established life.  While I feel I need to be gracious and in some way accepting of various shit slung my way, I suddenly feel like a door mat to folks who are not of the belief that THEY in turn are gracious to me just because I’m here with Matt.

So I’ve learned some good lessons here in the last year. Two way street folks. I show respect to you for the person you are and the impact you’ve had in lives of those I care for. Once that respect isn’t reciprocated, then I change course. Yes, I will still show respect when life demands that we’re in the same room. Of course. But I’m no door mat and taking advantage of a friendship with Matt doesn’t change that. Remember, he’s a lot nicer than I am. A lot.

Luckily for me, there are some of the most amazing people I’ve had the pleasure to be around here in Milwaukee. And other gyms who are not only run by gracious hosts, but even make me feel like a friend when we bump into each other. I value that, and them. It means the world to me and I’m always looking forward to our next outing. (Even if it’s in spin class which is really, really hard!)

Be gracious. Smile at people. Don’t put silly shit that means nothing above being nice to people. Don’t treat people like door mats but more importantly, don’t allow others to treat you as such. Never ever.

I’ve been through it all, baby, I’m mother courage.

For training opportunities at tosabarbell, call or text Juli at 320-296-9313. e-mail to jep6095@gmail.com At tosabarbell, I build relationships cultivated in a strength and learning environment. There is no 12 week magic pill program to strength but rather a lifetime commitment to be the very best and most useful human you can be. tosabarbell is a private, home grown gym with three lifting platforms; squat rack; prowlers; throwing implements; bars, bumpers and everything else needed for an effective strength and conditioning program. Straightforward barbell programming including the Olympic lifts; sound (read: not fancy bullshit) diet advance for weight gain or loss; and strong coaching will ensure you will meet your goals such as becoming stronger, more explosive, and better conditioned. I have been coaching teams and athletes for over 30 years. I grew up participating in various sports at various levels but was always drawn to those that require strength training. I have multiple local, national, and world records in the sports of Weightlifting and Highland Games Heavy Events as well as a combined total of 5 World Championships. My 5 years of training and coaching under Mark Rippetoe provided a wide range of influence from some of the top strength & conditioning and throwing coaches in the country. I will strongly encourage tosabarbell athletes to compete (and prepare you to do so.) However, tosabarbell is also for those who wish to be stronger and go through life feeling better. Matt WanAt is a retired Professional Strongman who competed frequently with Strongman Champions League in Europe. He played a year of D1 football with Iowa before concentrating on his Chemical Engineering degree in Iowa City. He is a native of Wauwatosa and still remains a staunch supporter of Tosa East. This blog will be a mixture of strength notes, coaching and nutrition tips, personal shit; bacon delicacies, and a whole lot of fun.
View all posts by tosabarbell →
This entry was posted in Uncategorized and tagged Elizabeth Taylor, Mean people suck, tosabarbell. Bookmark the permalink.