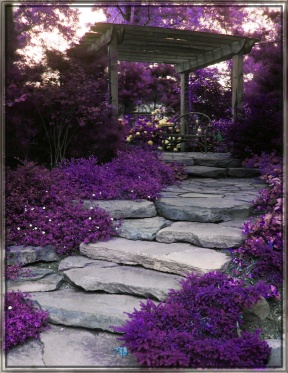 I love the color purple. Always have. I remember when I was FINALLY old enough for my mom to buy me nail polish, I chose a light purple, almost Lavender. I was so excited. My mom was less in love with the color but let me get it anyway. I went through the whole bottle within a couple of weeks. It’s still my favorite color of nail polish but I do tend to try other colors each week for variety. I even tried grey a couple of months back. That was the weekend that Bigg and I almost blew it, so lesson learned…no more grey. Grey is bad.

I caught the last third of the movie The Color Purple last night. I came in right at the scene where Oprah comes to life after being imprisoned; Whoopi finds her voice (finally) and tells Mr. to GFY and takes off with the singer lady. Ironically, this is also one of my favorite movies and no, not because it’s purpley. That’s just a bonus.

There were a few different ways the movie spoke to me. Watching Whoopi go from abused and scared to independent and successful was fun. The music was fantastic. Margaret Avery, the actress who plays Shugg, is the real deal. The dual scene between she and her Preacher father, Sunday morning between the sinners and the church goers, all coming together. The music, blues and gospel. Eventually being accepted by her constant disapproving father and suddenly all the sinners ending up in church finding a commonality in the love of music.  Forgiveness and open hearts all wrapped up in one morning with young singers bowing out to the seasoned veteran. Name most anything more awesome that that.

Of course at the end, Celie and Nettie are reunited. Sisters finding each other among color.

I’d like that. To find my long lost sister, Becky, in fields of purple. Or just anywhere.

I like the impact color can have on my day. Even if it’s not purple, but mostly if it is. It can brighten, or comfort, or bring up memories that have been hiding in our minds. It can signify a love for others (ribbons) or teams (coincidence that I’ve stuck with the Vikings all these years? Hmmmmmm.)  But mostly it can give us a much needed respite from the rediculousness of our world. Internet squabbles; the best way to squat; forum arguments; and yes, even food fights. Just Google purple gardens…and see where it takes you.  Take a breath…and be thankful that your life isn’t shittier than it could be.

I think it pisses God off if you walk by the color purple in a field somewhere and don’t notice it.

For training opportunities at tosabarbell, call or text Juli at 320-296-9313. jep6095@gmail.com tosabarbell is a private, home grown gym with three lifting platforms; squat rack; prowlers; throwing implements; bars, bumpers and everything else needed for an effective strength and conditioning program. Straightforward barbell programming including the Olympic lifts; sound (read: not fancy bullshit) diet advance for weight gain or loss; and strong coaching will ensure you will meet your goals such as becoming stronger, more explosive, and better conditioned. Juli has been coaching teams and athletes for over 20 years. She grew up participating in various sports at various levels but was always drawn to those that require strength training. She is a 2-time Master's Amercian Weightlifting Champion and holds six Master's American records. She is a Master's Weightlifting National Champion and holds three National records. She is a Master's Weightlifting World Championships Silver Medalist in 2016. Juli is also a Masters Highland Games World Champion and holds three World Records in the Braemar Stone; Heavy Weight for Distance, and Light Weight for Distance in the 45-49 class. Her 5 years of training and coaching under Mark Rippetoe has honed her coaching skills to be a top choice for you to reach your strength and conditioning goals. Juli will strongly encourage tosabarbell athletes to compete (and prepare you to do so.) However; tosabarbell is also for those who just wish to be stronger and go through life feeling better. Matt WanAt is a retired Professional Strongman who competed frequently with Strongman Champions League in Europe. He played a year of D1 football with Iowa before concentrating on his Chemical Engineering degree in Iowa City. He is a native of Wauwatosa and still remains a staunch supporter of Tosa East. This blog will be a mixture of strength notes, coaching and nutrition tips, personal shit; bacon delicacies, and a whole lot of fun.
View all posts by tosabarbell →
This entry was posted in Uncategorized and tagged Color, Purple, Purple Nails, Purple People Eaters, The Color Purple, tosabarbell. Bookmark the permalink.