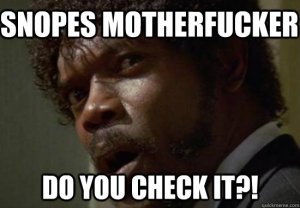 Do you remember hearing the one about the new minister at a shwank church who dressed as a homeless person and came to church to see how his new congregation would react? And then when they shunned him he was able to walk up to the pulpit and shame them? SO cool eh? It resurfaces every 7 months or so and all the wanna be nice people go, “Awwwww, I need to remember this lesson.” Problem? It’s bullshit. Fake.

How about the one where 72 people were killed in Boston when forced to turn in their guns. Honestly, if you’re silly enough to believe that on the FB then you deserve to be upset. Here’s one close to home, due to the cold weather there have been striped Iceberg sightings on Lake Michigan…

…oops, those are from years ago and taken 1700 miles SOUTH of South Africa. We’re way up here with our Lake Michigan. False. Again.

But I love the Snopes. I have no idea who they are but someone got fed up enough with all of these internet myths that they took action and actually spend time investigating them. Love it. Calling out the B.S. Right up our ally.

It occurred to me earlier this week that we should have a Snopes for training and trainers. Someone see’s a Jillian Michaels infomercial and can run to BULLSHIT TRAINERS DOT COM to check it out where, instead of the sweet persona she has on television, they could read the truth about her insane and crappy Hollywood style of training. Kind of like a Carfax for training.

So when someone at the gym reads another guys log on-line who just did 100 squats in the curl rack and decides that’s pretty badass and he should do that very same thing, we could direct him to BT.com. See, cuz what he didn’t see is 100 squat guy and his buddy discuss the whole Iowa football players rhabdo session and wondered if he did the same thing, would he get Rhabdo (and yes, men are that silly.) So he’s doing it now and copy cat guy didn’t see that yes indeed, 100 squat dude got Rhabdo. Had he checked the internet on bullshit programming, he’d have been saved from HIS case of Rhabdo.

But we don’t have it yet. So we need to start asking our own questions. When a WAC trainer tells you that you should never deadlift, you ask why. Why? Cuz he doesn’t know how to teach you but he won’t tell you that. He’ll tell you it’s because it’s bad for your back. Yup. It’s happened. When your Anytime Fitness trainer tells you to cut your calories down to 1100 per day and you’ll be amazed at the results, he won’t tell you that it is impossible to maintain a strong and healthy body on 1100 calories a day over time so when, after a week and a half, you start to feel like shit and want a cupcake bad enough that you’ll trade your car in for one he can tell you how you don’t have will power and need to stick with it for it to work. But that would be avoided if we just asked why? WHY? Everything that comes out of a trainer or coach’s mouth should have a mechanical and factual answer on why we’re doing what we’re doing. If the answer is every, ‘Ahhhhh, cuz it works best this way’ they’re done. Fire them. Their six week trainers course didn’t prepare them to train OR program you correctly. Move on. If your globo trainer has never heard of Dan John or Jim Wendler, fire them. They’re generic and have no idea how to program strength or fat loss. Word up.

Expect more. Much more. Ask why? Always ask why. Ask them who their influences have been in training. If they say Jillian Michaels or Dave Castro, run away. Fast.

I’ve been accused of vulgarity. I say that’s bullshit.

For training opportunities at tosabarbell, call or text Juli at 320-296-9313. jep6095@gmail.com tosabarbell is a private, home grown gym with three lifting platforms; squat rack; prowlers; throwing implements; bars, bumpers and everything else needed for an effective strength and conditioning program. Straightforward barbell programming including the Olympic lifts; sound (read: not fancy bullshit) diet advance for weight gain or loss; and strong coaching will ensure you will meet your goals such as becoming stronger, more explosive, and better conditioned. Juli has been coaching teams and athletes for over 20 years. She grew up participating in various sports at various levels but was always drawn to those that require strength training. She is a 2-time Master's Amercian Weightlifting Champion and holds six Master's American records. She is a Master's Weightlifting National Champion and holds three National records. She is a Master's Weightlifting World Championships Silver Medalist in 2016. Juli is also a Masters Highland Games World Champion and holds three World Records in the Braemar Stone; Heavy Weight for Distance, and Light Weight for Distance in the 45-49 class. Her 5 years of training and coaching under Mark Rippetoe has honed her coaching skills to be a top choice for you to reach your strength and conditioning goals. Juli will strongly encourage tosabarbell athletes to compete (and prepare you to do so.) However; tosabarbell is also for those who just wish to be stronger and go through life feeling better. Matt WanAt is a retired Professional Strongman who competed frequently with Strongman Champions League in Europe. He played a year of D1 football with Iowa before concentrating on his Chemical Engineering degree in Iowa City. He is a native of Wauwatosa and still remains a staunch supporter of Tosa East. This blog will be a mixture of strength notes, coaching and nutrition tips, personal shit; bacon delicacies, and a whole lot of fun.
View all posts by tosabarbell →
This entry was posted in Uncategorized and tagged Bullshit Trainer, Dan John, Jim Wendler, Snopes, strength training, tosabarbell, Wisconsin Athletic Club. Bookmark the permalink.