The Bar is NOT your Bitch. Bitch. It is a picture of an old York Barbell, the only thing missing from tosabarbell. I know where three of them are, extreme self control has prevented me from doing a bar swap when no one is looking. It is my favorite bar on the planet. I love our B&R Bars; I love the snappy feel of a Werksan and Eleiko bar, but the old York bars are my fav. I love how they get pushed aside at gyms lucky enough to have one and don’t even know it. They look rusty and old and ucky so people go for the shiny new ones that feel like crap. I trained at a gym in little town Minnesota that had one and the day I got kicked out of the gym (for “turning it into a Powerlifting gym”…dick) I seriously stared at it for 5 minutes wondering if I should take it. Yes, there were cameras and I see the asshat at the VF when we played Bingo so I eventually would have paid for it but then I’d have an old York bar. Damn values.

But I do like the bars we have. Bigg loves his Texas Deadlift bar and I did enjoy training on the York Weightlifting bars down in Texas. But that old York bar, Oooooo she’s a honey. She’d have a good home here, cuz we take care of our bars. Ya know what we don’t do? We don’t throw down our bars. We don’t allow people to roll them around with their feet. We don’t allow people to slam them into the rack after they PR’d. Cuz your PR, as fabulous as it is, is not more important than my Bar. True story.

There are so few circumstances where a bar thrown from overhead is appropriate I can only think of one. A Gold medal. As in… 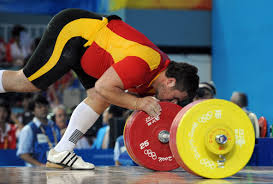 By the way, why do people only kiss the plates? I always give my bar a pat after a good day. The bar was with me the entire session, plates come and go. Heh. I remember one silly boy down in Texas who got pissed that his horribly form and lack of taking coaching (not by me) got out of control enough that when he missed his umpteenth consecutive snatch, he threw the bar across the platform. I told him that he was done for the day. He was shocked, why would he be done? Cuz you’re an asshole and will never throw a bar again while I’m in the vicinity of a mile. Get. Out.  I was so amazingly pissed I thought I’d like to throw HIM across the platform.

I am Hawaiian enough to believe that there is stored energy in a bar. What you put into it will come out. I will not always PR; the bar WILL always want to win, but we’ll work together and afterwards the bar will always get a pat. That bar helps me to maintain strength and health. It is never my enemy. If anyone comes into our house and disrespects our bars, they are done here. I don’t care if they are our best friend’s, they’re done.

Thrown bars (minus the Gold medal) are a sign of immaturity. Silly boys and girls throw bars. Those who have been taught by silly boys and girls that their 75 pound push press was elite. I’ve actually seen videos of folks throwing down their bars with 10# iron plates on them. That’s not badass. That’s dick. Don’t be dick. But really don’t be dick at tosabarbell, cuz if you get me on the wrong day, it won’t be pretty. The bar is never your bitch. In fact, it’s the exact opposite. If you can’t understand that? Then you’re not ready to touch it. True story.

Sounds naive respecting someone who doesn’t give a shit about you.

For training opportunities at tosabarbell, call or text Juli at 320-296-9313. e-mail to jep6095@gmail.com At tosabarbell, I build relationships cultivated in a strength and learning environment. There is no 12 week magic pill program to strength but rather a lifetime commitment to be the very best and most useful human you can be. tosabarbell is a private, home grown gym with three lifting platforms; squat rack; prowlers; throwing implements; bars, bumpers and everything else needed for an effective strength and conditioning program. Straightforward barbell programming including the Olympic lifts; sound (read: not fancy bullshit) diet advance for weight gain or loss; and strong coaching will ensure you will meet your goals such as becoming stronger, more explosive, and better conditioned. I have been coaching teams and athletes for over 30 years. I grew up participating in various sports at various levels but was always drawn to those that require strength training. I have multiple local, national, and world records in the sports of Weightlifting and Highland Games Heavy Events as well as a combined total of 5 World Championships. My 5 years of training and coaching under Mark Rippetoe provided a wide range of influence from some of the top strength & conditioning and throwing coaches in the country. I will strongly encourage tosabarbell athletes to compete (and prepare you to do so.) However, tosabarbell is also for those who wish to be stronger and go through life feeling better. Matt WanAt is a retired Professional Strongman who competed frequently with Strongman Champions League in Europe. He played a year of D1 football with Iowa before concentrating on his Chemical Engineering degree in Iowa City. He is a native of Wauwatosa and still remains a staunch supporter of Tosa East. This blog will be a mixture of strength notes, coaching and nutrition tips, personal shit; bacon delicacies, and a whole lot of fun.
View all posts by tosabarbell →
This entry was posted in Uncategorized and tagged barbells, Eleiko, Elite, Werksan, York Barbell. Bookmark the permalink.