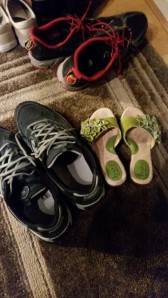 Auntie’s shoes next to Bigg’s

When I was very young, my often somber childhood took a turn for the better. My Auntie and Uncle moved back to Minnesota from Phoenix bringing my cousins Paul & barely talking Denise with them. They even lived with us for a short time while they found a home in Minneapolis. And they brought a microwave. A MICROWAVE! It was huge and took the whole counter but bygod, we had a microwave. Every day after school I would beat a couple of eggs in a coffee cup; toss it in the ‘Mic’, and let ‘er rip. BOOM! Scrambled eggs in 30 seconds. Rock star.

I’ve always had a special relationship with Auntie and Uncle, even when I didn’t know it. See, when my parents adopted me down in Texas, Dennis & Karen were in Hawaii and were so excited for their new Hawaiian niece that they bought me a grass skirt and top. I still have it. Dunno what I’ll do with it, but I’ve got it. When they moved to Minnesota, a whole new life opened up for us. We took time for more fun. Trekking out to Lake Street with not only a White Castle one way from Auntie’s house but a Winchell’s donuts the other. Disco.

My Uncle Dennis always brought out the fun in my dad. You could catch a glimpse of silly boys in their youth. Raising hell and trying to keep it from Grandpa (they never did.) See, my dad (Pastor John) was quite a big hellion in his youth and those stories only came out when Uncle Dennis was around and they’d laugh about them in front of my Grandpa who would just shake his head.

As for my Auntie, due to her (dare I say?) 5 foot (I don’t think it’s that tall) frame, she was always (still does) wearing higher wedged shoes. Whenever we’d go to their house, I would make a beeline for her closet and put on her stylish shoes. Until the 4th grade. That’s when I grew out of them. I can tell you this, it was a sad day for this big boned Hawaiian when I could no longer wear Auntie’s shoes. I didn’t have pretty shoes of my own and it would be a while before I got a pair. Now I have two! Wedged pairs of shoes that are Auntie wearable. I adore them and they are the only high heeled shoes I can wear for hours and hours. I’ve even flown in one pair comfortably. (Two may not seem like a lot but I hate shopping so once I find a pair I’ll wear them to death. True story.)

Our years growing up with Auntie and Uncle and Paul and Denise close by were good ones. Paul & I spent hours watching Get Smart; The Smothers Brothers; and Monty Pythons Flying Circus. We would laugh hysterically for hours and hours. To this day, my Firefighter cousin is one of my favorite people on earth. That he is happier now than he has been for a long time makes my heart swell and I’m so thankful I can hardly stand it. Denise, 6 1/2 years younger and I took a bit longer to become close due to our age but I believe she and I now have the sister relationship I didn’t have with my own and her kids are two of the most important little people in my life besides my own kids. Get the picture? These people are the most important family I have. Have been for a long time. Longer than I can remember. When we’re with them, the world is good.

So when we get the chance to  travel to the Seattle area, where they all are now, AND throw heavy stuff around. Well, we say, HELLZ YA! The last two years, we’ve enjoyed a couple of extra days out in the PNW with the Peterson crew. Next year, we may add more. Maybe try to throw in Portland the weekend before the ‘Claw and road trip for a week and have extra time with them. We just never have enough time. Not enough time for Ferry rides… 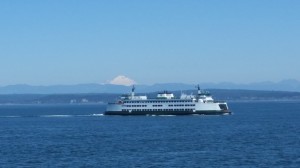 The Muk Ferry with Mt. Baker in the background.

Just not enough time. But we DID have enough time to smell the roses, errr, I mean hydrangeas (my favorite) 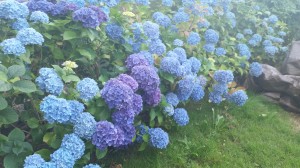 And enjoy spectacular views of Madame Rainier from not only the field and on the way to the field, but from the last Ferry ride before we left on Monday:

I can never get enough of Mt. Rainier.

Leaving the safe haven of Auntie and Uncle’s home is never easy for me. I never want to leave. Knowing I’ll return helps, but it is still a pensive time. Knowing their love is a gift. Knowing the peace and beauty of the Pacific Northwest with them in it is even better.

And as if knowing that saying goodbye makes me a little sad, the sun shines on the Sound and gives me one more memory of it’s splendor…

View from Auntie and Uncle’s driveway on our way out.

When in doubt, go for the dick joke.

For training opportunities at tosabarbell, call or text Juli at 320-296-9313. jep6095@gmail.com tosabarbell is a private, home grown gym with three lifting platforms; squat rack; prowlers; throwing implements; bars, bumpers and everything else needed for an effective strength and conditioning program. Straightforward barbell programming including the Olympic lifts; sound (read: not fancy bullshit) diet advance for weight gain or loss; and strong coaching will ensure you will meet your goals such as becoming stronger, more explosive, and better conditioned. Juli has been coaching teams and athletes for over 20 years. She grew up participating in various sports at various levels but was always drawn to those that require strength training. She is a 2-time Master's Amercian Weightlifting Champion and holds six Master's American records. She is a Master's Weightlifting National Champion and holds three National records. She is a Master's Weightlifting World Championships Silver Medalist in 2016. Juli is also a Masters Highland Games World Champion and holds three World Records in the Braemar Stone; Heavy Weight for Distance, and Light Weight for Distance in the 45-49 class. Her 5 years of training and coaching under Mark Rippetoe has honed her coaching skills to be a top choice for you to reach your strength and conditioning goals. Juli will strongly encourage tosabarbell athletes to compete (and prepare you to do so.) However; tosabarbell is also for those who just wish to be stronger and go through life feeling better. Matt WanAt is a retired Professional Strongman who competed frequently with Strongman Champions League in Europe. He played a year of D1 football with Iowa before concentrating on his Chemical Engineering degree in Iowa City. He is a native of Wauwatosa and still remains a staunch supporter of Tosa East. This blog will be a mixture of strength notes, coaching and nutrition tips, personal shit; bacon delicacies, and a whole lot of fun.
View all posts by tosabarbell →
This entry was posted in Uncategorized and tagged cousins are fun, Enumclaw, Henri's donuts, Mt. Rainier, Mukilteo, PNW, Whidby Island. Bookmark the permalink.