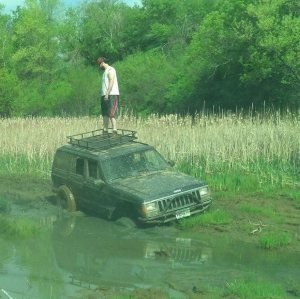 Last Sunday, I woke up around 6am to a text from the daughter, who was scheduled to return home that day after a Minnesota New Years celebration with her friends. In general, middle of the night texts or calls are not good. Middle of the night SnapChats are usually entertaining, not calls. The one line text was to tell me that her friend since early middle school, Jacob Reno, had killed himself the evening before. My reply,

No. Not another Hutchinson suicide. Not again. And especially, not Reno. Just no. No. No. No.

As much as I want to rail on what is happening in this town that this is the 3rd suicide in 5 months time and WTF is going on that there is seemingly a veil of hopelessness for these young people; to do so would not give honor to Reno’s memory, and the way his friends are getting through this.

That is the story for today.

A passion of Reno’s was off roading. He and all of his friends are the epitome of boys just wanting to play in the mud. And as they got older, their toys (and their creativity) got better in allowing them to do so.

As you can see in the first picture above, Reno would put his jeep through just about everything it could survive. And some it couldn’t. Heh. Because of this, the jeep had been parked for a while with hopes of getting it up and running again to mud on in Appleton (Minnesota. Yes, there’s an Appleton, Minnesota. Who knew?) which is a popular off road area.

When the news spread throughout Reno’s friends of his passing, they, in search through their shock and grief for some meaning in all of this suddenly found a mission. Get Reno’s jeep up and running. And not only up and running, but spotless and beautiful. A ride befitting of one of the best friends they’ll ever have. And off they went.

Night and day, this crew worked. That they took a mud spattered vehicle that hadn’t been running in over a year to fully restored in just under 5 days gives us just a glimpse of the almost panicked drive to do something. Anything. Just do something to get through this.

And they did. Actually twice. Here is Reno’s father in the restored Jeep. Beautiful. I was fortunate to watch them put the final touches on Thursday evening and get it running. Through their tears, and sobs, there were sad smiles. A job well done, giving purpose in spite of so many questions and sadness. I quietly stood off to the side in complete awe of these young people. When I walked in, there were some terse, stressed conversations in one corner. A little small town drama in another. But when the Jeep sprang to life, all of that stopped. All focus was on that Jeep. Cheers; more smiles; and many more tears. So happy with the accomplishment, so sad for it’s purpose. It was devastatingly beautiful to watch.

But, the ‘little boys who love to play in the mud’ quickly came out and they decided to take it for a spin (living out of town in the country has it’s advantages.) And who better to pilot the maiden voyage than Reno’s younger brother. They took off and conversation resumed around the garage. Suddenly, the door opened, and the jeep limped it’s way back in to more cheers; more laughter; and yes, more tears. 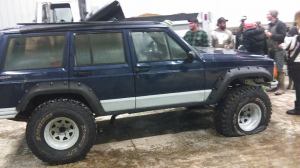 A blown tire, smooshed mirror and a roof rack gone (it took a couple of minutes to register that one) later and they quickly went back to work. It was something to see.

The next day the kids decided to salute  Reno’s memory by parking their trucks at the High School just like they did back in the day (which earned each of them a $140 ticket waiting for them after school. This time they had permission.) Heh. Everyone wanted in and it was really as festive as a sad occasion allows in 30 below windchill, Minnesota winter. All of the vehicles, including Reno’s truck AND his Jeep got parked as high up the snow bank as possible (yes, many were towed out afterwards.)

Another accomplishment. Something needed so much in times of such sadness. To the rest of the world, parking your trucks on a snowbank means nothing. To this group, it meant everything. Seeing his truck and his Jeep right along with everyone else’s…a moment to forget about this horrible nightmare.

There were many, many moments all weekend long that showed this groups unity. As proud of them as I am, I ache for them. There is such pain. Too much pain. These kids have been through so much tragedy and now must walk through another. I worry that as “real life” of jobs and responsibilities set in and take over again that the togetherness that has seen them through this far, may be lost. That they forget how they came to honor Reno and grieve. Together. That small town dust ups will again carry too much meaning which causes more hurt feelings and a sense of alone. I worry that this group hug will be forgotten through hurt and processing grief.

I worry that my daughter, who is back home safe and sound (thankfully) but is so sad will live to bide her time until she is back with her friends and forget to fully live life. I worry for my son who is still there and at times, is just surviving each day. I worry for those who carry images in their minds of unimaginable horror instead of happy times with their friend. Those who carry guilt for an imagined part in Reno’s death. I worry that they’ll forget, in time, to keep checking on each other. And maybe more importantly, that they’ll forget to be honest with each other when life gets too hard and ask for help.

But in spite of the worry, I picture how they all came together to find purpose; to grieve; to laugh and cry; to give comfort to each other and Reno’s family; to remember; and yes, even to argue a little as they work out their own feelings and I feel hope. Hope that, in time, they will live full and amazing lives that honor the smiles of Reno and his memory.

And I tell ya what, I will never again pass a mud puddle without thinking of Reno’s smile…and that picture of him on top of his Jeep in the mud. And I may even jump in one, if only to reach out a little bit to the memory of a boy who loved the mud.

All these people live as long as you remember ’em.

For training opportunities at tosabarbell, call or text Juli at 320-296-9313. jep6095@gmail.com tosabarbell is a private, home grown gym with three lifting platforms; squat rack; prowlers; throwing implements; bars, bumpers and everything else needed for an effective strength and conditioning program. Straightforward barbell programming including the Olympic lifts; sound (read: not fancy bullshit) diet advance for weight gain or loss; and strong coaching will ensure you will meet your goals such as becoming stronger, more explosive, and better conditioned. Juli has been coaching teams and athletes for over 20 years. She grew up participating in various sports at various levels but was always drawn to those that require strength training. She is a 2-time Master's Amercian Weightlifting Champion and holds six Master's American records. She is a Master's Weightlifting National Champion and holds three National records. She is a Master's Weightlifting World Championships Silver Medalist in 2016. Juli is also a Masters Highland Games World Champion and holds three World Records in the Braemar Stone; Heavy Weight for Distance, and Light Weight for Distance in the 45-49 class. Her 5 years of training and coaching under Mark Rippetoe has honed her coaching skills to be a top choice for you to reach your strength and conditioning goals. Juli will strongly encourage tosabarbell athletes to compete (and prepare you to do so.) However; tosabarbell is also for those who just wish to be stronger and go through life feeling better. Matt WanAt is a retired Professional Strongman who competed frequently with Strongman Champions League in Europe. He played a year of D1 football with Iowa before concentrating on his Chemical Engineering degree in Iowa City. He is a native of Wauwatosa and still remains a staunch supporter of Tosa East. This blog will be a mixture of strength notes, coaching and nutrition tips, personal shit; bacon delicacies, and a whole lot of fun.
View all posts by tosabarbell →
This entry was posted in Uncategorized and tagged A friend's farewell, Greiving, Jacob Reno, Saying Goodbye. Bookmark the permalink.