How The Fuck Are Ya?!

Upon arriving in Iceland after an 18 hour fly day, to say we were excited but exhausted would be pretty dead on. We jumped in our rental car shuttle and lol’d out loud when the van started up to the radio blasting a morning show where one of the DJ’s yelled into the microphone, ‘HOW THE FUCK ARE YA?!’ That. Was. Awesome.

My Blue Lagoon pictures don’t do it justice, one of these days I’ll invest in a decent camera. Since we couldn’t check into our flat until later, we headed right to the Lagoon for some post flight R&R. We actually saw many people from our plane so I guess we’re not as creative as we thought we were. It turns out that you should have reservations when going but we decided to wait it out and have a snack. It was a great decision because we only had to wait 20 minutes or so. 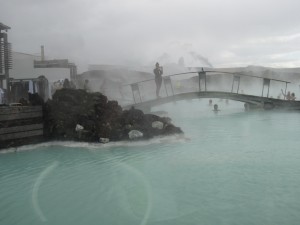 It also gave us our first taste of the quality of people the Icelander’s are. Either these folks have customer service dialed in to a science or are just actually incredibly helpful people. I’m going with the latter because we ran into this the entire trip. Never in my limited travels have I come across so many lovely people. There is a helpful calm about them even when they’re running around going slightly nuts (car rental took a while since so many were late with drop off’s. The workers were obviously a little frazzled but were pleasant and helpful the whole time.) Back at the Blue Lagoon, I had at least three warnings to condition my hair thoroughly before AND after being in the thermal baths and told to put my hair up. When I said I didn’t have a pony, one of the girls in training grabbed her wrist and said, “Here, take mine.” Girls who have needed pony’s and never found one will understand how huge this is. I conditioned, put my hair up and didn’t let it touch the water which I guess is a good thing because when we were on our way home we were talking to a Minneapolis woman who saw us at the Blue Lagoon and said her hair was still a mess from the water. I was doubly thankful for pony girl at that point.

After a couple of hours in the water soaking and steaming, we finally felt relaxed. Enough so to know we needed to get into town and find our flat so we could nap. Our drive to Reykjavik was beautiful and I lost count on how many times one of us would mutter, “I can’t believe we’re in Iceland.” True story. 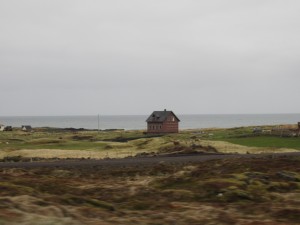 I’m more than a little curious on how these homes are built on the volcanic rock. But they were beautiful and I can’t imagine the strength it takes to live in this environment year round.

We picked up a few groceries in town and headed to the flat. The location was perfect, just off the water and about a block away from the city center (we’ve learned that when finding a flat in Europe anywhere, go for the city center locations due to the shops and food available.) Once we got there, we realized that we didn’t know how to check in. I was able to find an email about check in but it was in Icelandic and my phone wouldn’t translate the information into English. Hmmmmm, what to do, what do to…

So we found a bar two doors down. Duh. We had a beer and showed the bartenders our email and asked if they could translate. They did, which didn’t actually tell us much so they ended up just calling the landlord. He must have asked where we were because in English, Keeli (the bartender) says, “Yes, they’re right here in my bar drinking.” That was pretty lulz. Matt ran down to the flat and got us squared away and we finished our beer.

The flat was perfect, the covered patio is where we spent the most time, which actually gave us a false sense of the weather since we never felt the rain. Lol. It turned out that our landlord ran a Kabob restaurant and on Saturday afternoon even made us a mountain of protein which was absolutely delicious and much appreciated after a day of snacking.

We had a great dinner at Petur’s house that evening with his lovely family and got a chance to meet some other throwers and helpers including Belgian giant Tommy De Bruijn and his adorably energetic, friendly wife Sigrid. Petur’s wife, Elisabeth, cooked up two different types of fish dishes and potatoes and ya know what? After over 40 hours without a home cooked meal, this will go down as one of my favorites. The only problem is that I ate too much and couldn’t eat as much of the skyr dessert that I wanted. Poor me.

It seems that we just assumed tired was normal from travels when actually it was quite late as we began our way back into the city. This was the Reykjavik portrait as we made our way down the hills:

I tell ya what, the steady stream of daylight made it tough to head to bed. More daylight means more fun and after a nightcap at home, we realized it was close to midnight and maybe we should think about going to bed. Ya think?

All in all, from start to finish of our first day in Iceland, it was magical. By far exceeding our expectations in every way possible and we went to sleep very tired, but very fulfilled and thankful.

The problem with driving around Iceland is that you’re basically confronted by a new soul-enriching, breath-taking, life-affirming natural site every five goddamn minutes. It’s totally exhausting.

For training opportunities at tosabarbell, call or text Juli at 320-296-9313. jep6095@gmail.com tosabarbell is a private, home grown gym with three lifting platforms; squat rack; prowlers; throwing implements; bars, bumpers and everything else needed for an effective strength and conditioning program. Straightforward barbell programming including the Olympic lifts; sound (read: not fancy bullshit) diet advance for weight gain or loss; and strong coaching will ensure you will meet your goals such as becoming stronger, more explosive, and better conditioned. Juli has been coaching teams and athletes for over 20 years. She grew up participating in various sports at various levels but was always drawn to those that require strength training. She is a 2-time Master's Amercian Weightlifting Champion and holds six Master's American records. She is a Master's Weightlifting National Champion and holds three National records. She is a Master's Weightlifting World Championships Silver Medalist in 2016. Juli is also a Masters Highland Games World Champion and holds three World Records in the Braemar Stone; Heavy Weight for Distance, and Light Weight for Distance in the 45-49 class. Her 5 years of training and coaching under Mark Rippetoe has honed her coaching skills to be a top choice for you to reach your strength and conditioning goals. Juli will strongly encourage tosabarbell athletes to compete (and prepare you to do so.) However; tosabarbell is also for those who just wish to be stronger and go through life feeling better. Matt WanAt is a retired Professional Strongman who competed frequently with Strongman Champions League in Europe. He played a year of D1 football with Iowa before concentrating on his Chemical Engineering degree in Iowa City. He is a native of Wauwatosa and still remains a staunch supporter of Tosa East. This blog will be a mixture of strength notes, coaching and nutrition tips, personal shit; bacon delicacies, and a whole lot of fun.
View all posts by tosabarbell →
This entry was posted in Uncategorized and tagged Blue Lagoon Iceland, Iceland, Icelandic Charm, Icelandic hospitality, Reykavik, Skyr, tosabarbell. Bookmark the permalink.