Things That Are So Very Unhelpful in Highland Games 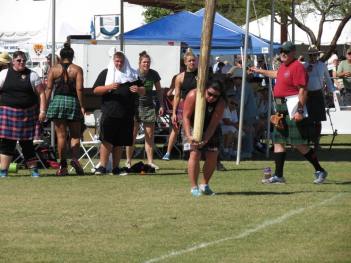 If Katie Crowley could will my Cabers to turn I’d be the perfect Caber tosser. But, ya know, not really so.

I’m finally starting to feel recovered after last weeks
vacation at Auntie’s house and the whole Enumclaw experience (more on that soon.) Helping on the field Saturday; throwing Sunday; jumping on a plane overnight and after an hour nap, jumping in the car for another 7 hours just plum wore this gal out (yes, Minneapolis to Milwaukee is a 5 hour car ride but I had to stop every 40-50 miles to close my eyes. Tired much?)

Nearly every memory I have of last week is wonderful. Spending time with family and trying to win the lottery (that was Plan A on how to travel around the world more often); ferry rides; car rides in the mountains; playing in mountain streams with Oz (he says, ‘we can do that?’ I says, ‘yes we can!’)

As usual, I learned so much more from watching the best and not only hearing quick cues given to others (for some reason, my hearing goes bionic at Highland Games;) but receiving some great advice on the throws and things to work on back home. Which always brings to mind things I DON’T  want to work on. Ya know, that really nice and well meaning advice we receive from throwers who maybe have been around for a long, long time but haven’t made it out of the B group.

Yes, I know I’ve written about this before, probably many times. But too many people aren’t listening. Plus it’s fun for me.

…(that’s what he said.) Now, I know this is screamed at least 4,969 times during a Games. Believe me, I know. I also know that it is screamed because people want the athlete to succeed. Awwwww. I’ve always acknowledged that this is part of what make Highland Games so awesome, it’s people. But JHMFC people, SHUuuuuuuuuuut Uuuuup! This is my worst pet peeve ever. Know why? CUZ I FUCKING KNOW I NEED TO PULL IT IN (that’s what she said.) There have been times where I’ve been so frustrated that people are screaming at me so violently to ‘pull it in’ as if we have some kind of fucking coaching relationship that I’ve just laid the caber down. This hasn’t happened for a long time but it’s happened. I like the head shake that comes after as if I’d only listened to their brilliant fucking advice to ‘pull it in’ I would have turned a perfect 12. (By the way, don’t try to get me off my game by using this tactic. I’ve also learned how to travel with a caber and I’ll be coming your way if you try.)

Ya know what I like best about competing at Enumclaw and the likes? The quality of throwers attending from all groups mean that when people yell your way, you’re getting quality advice. Drive your shoulder (I swear, Mark Wechter can yell at me from a mile away and I’ll not only know it’s him, but I’ll do what he tells me and I’ll improve the toss no matter what it is.) Back up; elbows up; keep it close; move faster; pull sooner. All active cues (the ‘keep it close’ is key for me and I forgot to do that last week. I tend to let my hands go out in front of me on the drop and then lose a perfectly ready to turn caber forward.) Now I know. The nice thing is that I put some speed on the run and it felt magical. It’s coming.

PULL IT IN is something that needs to happen, not something useful to MAKE it happen. There’s a difference. Fucking duh.

You had the height.

Srsly. Just don’t tho. Here’s one of my, perhaps, most important lessons of this year. When someone misses or bombs out on WOB, give them space. When they’re ready to rejoin society, they will. But give them space. I’ve written about it recently and even experienced it (almost) at the ‘Claw. WoB is a maddening, get in yo head event and when you know you can kick it’s ass and it kicks back and wins, just STFU and give some space. I had a decent WoB last Sunday but I came down to my 3rd attempt at my opener and it BARELY squeeked over the bar. Later, I hit a nice 17′ on first try and came close to 18’2″ but no cigar. I’ll take it. I probably would have made 18’ and that’s my PR so I’m happy. But there were a couple who weren’t and I just gave them space until they were able to shake it off.

I’m going to say something that will probably be misconstrued and some will say I’m a total bitch for saying it (I mean, people who haven’t said that before.) I’m typing this in a gentle voice, got it? In the Masters class, Women’s anyway, there can be a large disparity in the level of throwers. Just this last weekend, we had a brand new thrower in our group who’d attended the Games but never threw. She did awesome. She was upbeat all day; always ready to go on her turn; encouraging of others, and happy to be there. Well done Stacey.

However, because of this disparity, there are many times where people throwing in the bottom half of the field get frustrated with the top half when we don’t feel like we’re doing our best. After all, our worst is still much better than their best. What I’m asking is to please not criticize those of us who want to kick all the ass for not being so happy immediately after a crap throw or a WoB out or a ‘not 12’ turn. We know what we can do, we want to win, we want to do our best. To my knowledge, no one has been criticized for not throwing “x” number of feet on a throw. Allow the same courtesy. Please. Last weekend there were three of us either tied or within one or two points of each other all day. It was one of the best competitions I’d been in to date for Highland Games. But what that means is; shit’s tight. I imagine my last couple of competitions here will be the exact same.

So to “have the height” in a competition such as this means dickall. We’re going for successful throws here, nothing else.

Second place is really good too.

One of the tougher things to understand for those who haven’t grown up in sports (as many masters athletes in the Games are) is that while we don’t like to lose, we can still be happy for those who won. In every single case of my coming in second or lower in any athletic venture I’ve ever attempted since I was six years old is  that my results lay solely on me. Which means if I blow a 3 point lead with three events left, than it’s likely someone else will walk through that window I just left open. As they should.

Watching (in this case) Michaela realize her win during the Caber toss last year at World’s was magical. Her smiles; her hugs; her happiness. It was cool as shit. Second place? Not as cool. See how the two can live together just fine? Most athletes are able to be happy for the good people who succeed (if you’re an asshole? Piss off, there’s an entire group who want to take you down and not just on the field.) That doesn’t diminish the disappointment in not doing it yourself. That’s okay. At the end of the day we’re all going to end up at the same beer tent (even the assholes) and have fun (except with the assholes. I stay away from them.) 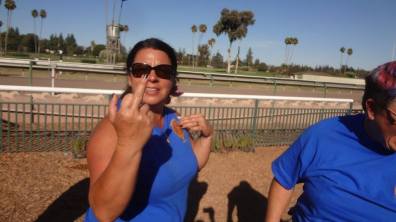 I feel like Mona really captures the essence of me at Pleasanton last year;)

Man, if I had a million dollars for every time this has happened.

In conclusion (I’d always start my high school papers final paragraph like this if only for those two extra words and I was needing to hit 1000. Like seriously, what if I can say what I need to say in 400 words. I wish I’d have known then to write a 400 word perfect essay and then write “steak” another 600 times), I don’t know. People are still going to scream “pull it in.” People will still say, “you had the height” in a super encouraging way because they’re happy for you that you displayed the ability to have the height.

People always mean well. Except the assholes. They can eat a bag of cool ranch dicks.

It’s hard to make out the difference between insults and bad advice.

For training opportunities at tosabarbell, call or text Juli at 320-296-9313. e-mail to jep6095@gmail.com At tosabarbell, I build relationships cultivated in a strength and learning environment. There is no 12 week magic pill program to strength but rather a lifetime commitment to be the very best and most useful human you can be. tosabarbell is a private, home grown gym with three lifting platforms; squat rack; prowlers; throwing implements; bars, bumpers and everything else needed for an effective strength and conditioning program. Straightforward barbell programming including the Olympic lifts; sound (read: not fancy bullshit) diet advance for weight gain or loss; and strong coaching will ensure you will meet your goals such as becoming stronger, more explosive, and better conditioned. I have been coaching teams and athletes for over 30 years. I grew up participating in various sports at various levels but was always drawn to those that require strength training. I have multiple local, national, and world records in the sports of Weightlifting and Highland Games Heavy Events as well as a combined total of 5 World Championships. My 5 years of training and coaching under Mark Rippetoe provided a wide range of influence from some of the top strength & conditioning and throwing coaches in the country. I will strongly encourage tosabarbell athletes to compete (and prepare you to do so.) However, tosabarbell is also for those who wish to be stronger and go through life feeling better. Matt WanAt is a retired Professional Strongman who competed frequently with Strongman Champions League in Europe. He played a year of D1 football with Iowa before concentrating on his Chemical Engineering degree in Iowa City. He is a native of Wauwatosa and still remains a staunch supporter of Tosa East. This blog will be a mixture of strength notes, coaching and nutrition tips, personal shit; bacon delicacies, and a whole lot of fun.
View all posts by tosabarbell →
This entry was posted in Uncategorized and tagged Assholes everywhere, Caber Toss, Highland Games, Highland Games advice, Maxie, Pro Athletes, tosabarbell, Weight Over Bar. Bookmark the permalink.