Be a Horse in a Dog’s World

It only took about 24 takes to get this picture. Clearly Taszer had a blast. Dazzle? Not so much.

It’s been three and a half years since we had to put down our old boy, Preacher. At the time, I didn’t think I’d ever be able to get another boy again. Preacher was it. He was the Walrus. He was The Man. He was on duty from the moment we met him until the horrible day we had to say goodbye. While Dazzle was our sweet and silly little girl that came to give him some pep in his step, Preacher was our forever dog.

And then almost a year later, after a visit to Minnesota which included spending time with our Kuvasz breeder family I got a text saying that a boy named Taszer (they spelled it “Tazer”, I added the sz for the full Hungarian feel;) had fallen in love with Zandra and told her that she needed to take him home. Home being my house at the time as she was getting on her feet after stumbling a bit. Hmmmmmm, am I ready for another boy? Will he be as perfect as Preacher?

Well, no. He wasn’t. Of course. But I tell ya what, he was many things that Preacher wasn’t and most important of all-he loved his new girl and loved us. So eventually, he came home. Home being MY home. Now, Taszer was already 5 years old so some of the house noises and goings on were a bit foreign to him. He wasn’t afraid of the vacuum until Dazzle talked him into it. He wouldn’t eat cheese treats until Dazzle called him a moron enough times that he’d finally take it as a treat. To his last days, he’d still carefully take the first bite back to his bed and munch it and then run back to the kitchen for more. Which was usually gone because Dazzle was all, “move your feet lose your cheese, dude.”

Around his first Christmas here, Zandra and I were having an argument and I yelled at her. Afterwards, Za went to work and I had a session out in the gym. When I came back to the house, Taszer had literally shit and pee’d all over my floors. From the kitchen to the living room to the back room. All. Over. And as my head nearly exploded, he just sat and looked at me with a “Do not ever yell at my girl again” face. In which case, I calmly looked at him and said, “If you ever do anything like this again you are fucking gone. Got it? Fucking. Gone.” I’m pretty sure he gave a slight nod and walked away feeling as if he had won that round. Tell ya what, Working Dogs are no joke. Of course Zandra thought it was hilarious and probably gave him treats for sticking up for her.

One of the more endearing attributes of Taszer is that he thought he was a horse. Now, I’m not just saying this. See, the breeder’s live out in the country and for a long time have had horses living on the other side of their fence. My theory is that Taszer saw them run and said to himself, ya-that’s me. That’s what I look like when I run. 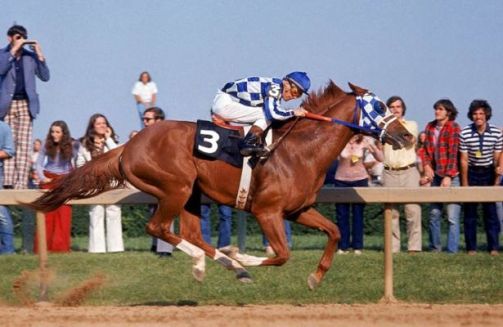 Secretariat. One evening the Disney ‘Secretariat’ movie was on the television and during the middle of it, Matt motioned for me to look at Taszer who’s bed was always right next to my chair. Sure as shit, he was watching intently and I’m quite sure recognized the horses as his brethren.

There was nothing “Dog” about Taszer’s run. He would trot; cantor; chuff when annoyed or tried to intimidate you; his little doggy feet would sound like thunder when he got a good gallop on in the back yard which was pretty impressive because our back yard isn’t very big at all. Basically, Taszer lived his life believing he was a horse. When we’d pass other dogs when out walking he wouldn’t give them the time of day. He wasn’t rude about it, he just didn’t believe he needed to associate with them. He was very sweet with Dazzle but maybe she looked enough like him to know that while she wasn’t a big, beautiful creature like him, she was okay. 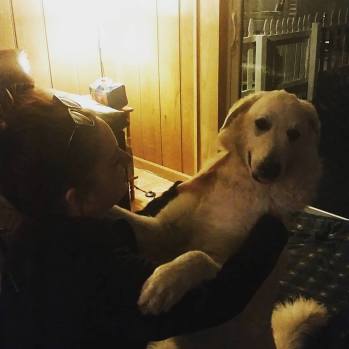 Taszer always had smiles for his girl.

When Zandra moved back to Minnesota we kept Taszer here to make sure she could find a place and get situated. Then a funny thing happened: Taszer became MY boy. Pre-Christmas shitting was forgotten and I came to rely on his majestic attitude and overall silliness. Taszer never got enough pets. If you were sitting on a chair and had your hand available, he’d come up underneath it with his head and keep bothering you until you started petting him. The wood floors were always a bit of a challenge for him and at times when he was slipping about he would just look at me and say, “Would you just get horse stall mats like all the other horses have, Mom?”

He was family, not just Zandra’s dog. Ours. Mine. Dazzle’s. Family.

We “joked” with the breeder’s after bringing Taszer home that he would keep Dazzle young and when Dazzle finally passed on we would get another little girl to keep Taszer young and the cycle would just continue through the years. Taszer turned 8 this fall and Dazzle 10 but both of them were in great health and I felt comfortable that saying goodbye was a long ways off.

This picture was taken in mid-October. Right after Taszer’s 8th birthday. He and Dazzle were on a field trip to my son’s house for the weekend and Zac’s girlfriend’s dog kept trying to snuggle up to Taszer. She finally won and there ya go. Adorbs.

But then he wasn’t. Taszer had a very fast and devastating brain tumor that took him in under two months. It was horrible. Two days after Christmas, Matt already on a plane for a quick work trip and the kids packing up to head back to Minnesota and I knew Taszer had taken a turn for the worse. I told Oz and Zandra to say goodbye and then, even though my house was trashed from a week of Christmas fun, I laid on the floor by his side and didn’t move. I tried to force some water into his mouth and just cried. No. Way. It’s only been two years. You’re only 8. We have more years we’re supposed to spend together. This cannot be our ending. Even though I knew it was.

Our vet was supportive and we made an appointment for the next morning to say goodbye unless his condition improved. But we all knew it wouldn’t. I talked to the breeder’s and let them know what was happening and they were supportive and loving. I had a plan in the event he went into distress during the night and slept right by his  side on the floor to make sure he was comfortable. We watched the Hobbit movies, something that will always remind me of him. I didn’t want to even close my eyes knowing that 9 a.m. the next day is looming.

Taszer had a relatively comfortable night but around 5a.m. he started to visibly be, “not awesome.” I knew this was the right thing to do but seeing him jump into the car for his last time and especially out of the car at the vets absolutely shattered me. How can this dog who seems to healthy getting out of the car be dying today? One look at him by the Doctor when she came in the room and said, “Yes, it’s time” gave me very little comfort. I know it’s the right thing to do, but still so very difficult.

I’m thankful for our time together but still so sad that it wasn’t long enough. I’m sad that I lost a family dog to disease rather than old age. I’m sad that Dazzle doesn’t have her buddy. I’m just so sad. OH! Here’s a fun Taszer story; while digging isn’t a huge problem with our Big White Dog’s, Taszer had dug a hole so deep in our back yard corner that prior to a cold spell before Christmas, he was in the hole so far that for a minute I couldn’t see him. When I started to call for him, he butt up’d and happily strolled to the door. Filthy, which was fun because he’d just had a bath, and satisfied. I’d joke with our neighbor that some day our dog is going to find the dead body he’d buried in our yard and he’d laugh…I think. I’ll always believe Taszer’s one regret in life was that he never found that dead body. Now we have a hole about four feet deep in our yard. I dunno, plant a tree? Big boy, I miss you so much.

But here is Taszer’s legacy: be a horse in a dog’s world. Be bigger and better than everyone around you even if those around you are already big and good. Strut your shit because you are a magnificent beast, errrr, person. Don’t get distracted by those little dogs, errr, problems that are insignificant in the long run. Be a horse in a dog’s world.

As I opened the back of the car to let him out at the vets, I snuggled deep into his fur and said, “You are the greatest horse I have ever loved. You are irreplaceable. You will never be forgotten.”

If having a soul means being able to feel love and loyalty and gratitude, then animals are better off than a lot of humans

For training opportunities at tosabarbell, call or text Juli at 320-296-9313. jep6095@gmail.com tosabarbell is a private, home grown gym with three lifting platforms; squat rack; prowlers; throwing implements; bars, bumpers and everything else needed for an effective strength and conditioning program. Straightforward barbell programming including the Olympic lifts; sound (read: not fancy bullshit) diet advance for weight gain or loss; and strong coaching will ensure you will meet your goals such as becoming stronger, more explosive, and better conditioned. Juli has been coaching teams and athletes for over 20 years. She grew up participating in various sports at various levels but was always drawn to those that require strength training. She is a 2-time Master's Amercian Weightlifting Champion and holds six Master's American records. She is a Master's Weightlifting National Champion and holds three National records. She is a Master's Weightlifting World Championships Silver Medalist in 2016. Juli is also a Masters Highland Games World Champion and holds three World Records in the Braemar Stone; Heavy Weight for Distance, and Light Weight for Distance in the 45-49 class. Her 5 years of training and coaching under Mark Rippetoe has honed her coaching skills to be a top choice for you to reach your strength and conditioning goals. Juli will strongly encourage tosabarbell athletes to compete (and prepare you to do so.) However; tosabarbell is also for those who just wish to be stronger and go through life feeling better. Matt WanAt is a retired Professional Strongman who competed frequently with Strongman Champions League in Europe. He played a year of D1 football with Iowa before concentrating on his Chemical Engineering degree in Iowa City. He is a native of Wauwatosa and still remains a staunch supporter of Tosa East. This blog will be a mixture of strength notes, coaching and nutrition tips, personal shit; bacon delicacies, and a whole lot of fun.
View all posts by tosabarbell →
This entry was posted in Uncategorized and tagged Dazzle Dog, Kuvasz, Losing your pets, Loss, Saying Goodbye, Szumeria Kuvasz, Taszer Dog. Bookmark the permalink.

2 Responses to Be a Horse in a Dog’s World