It seemed yesterday was designated the “motivate me to get back to the gym” day on Tweeter. I saw a handful of motivation requests of some big name gym dudes and thought, Huh. Dude, if you already know you need to get to the gym, just go!? Why are you asking Arnold for some motivation before you do it?

There are many different reasons we decide to hit the gym and continuing a D1 level of speed/strength/fitness/whatever applies to a very low percentage of people. The rest of us need to decide for ourselves why we’re there. There are women all over the country very happy and content with hitting the elliptical every day and skipping out on strength training. Do I wish they’d pick up a dumbbell or barbell too? Of course, but that’s not up to me.  I’m just happy they’re not sitting on their couch WATCHING an aerobic video telling themselves they’ll start “next week.”

I miss The Biggest Loser. First off, the entertainment the “trainers” provide is Gold. Watching Jillian Michaels sit on fat people while screaming in their face? Pure entertainment. I’m still waiting for the day one of these people hauls off and cracks her a good right hook. That’d be good tv right there. Most of all; however; the show is a huge motivator for the overweight of the world to get moving. The quasi-celebrity the contestants leave the show with allows them to speak to other overweights and get THEM moving. It gives people a connection that a track star in a skimpy sport bra and tight shorts just “Doing It” fails to do.

For now, folks will have to find their motivation (hopefully) in the fact that they feel like crap and can barely move. Or wait until January. More good news? Jillian’s back! 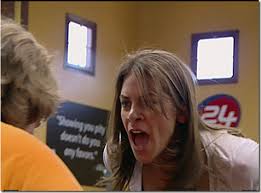 There are more pleasant things to do than beat up people.

For training opportunities at tosabarbell, call or text Juli at 320-296-9313. jep6095@gmail.com tosabarbell is a private, home grown gym with three lifting platforms; squat rack; prowlers; throwing implements; bars, bumpers and everything else needed for an effective strength and conditioning program. Straightforward barbell programming including the Olympic lifts; sound (read: not fancy bullshit) diet advance for weight gain or loss; and strong coaching will ensure you will meet your goals such as becoming stronger, more explosive, and better conditioned. Juli has been coaching teams and athletes for over 20 years. She grew up participating in various sports at various levels but was always drawn to those that require strength training. She is a 2-time Master's Amercian Weightlifting Champion and holds six Master's American records. She is a Master's Weightlifting National Champion and holds three National records. She is a Master's Weightlifting World Championships Silver Medalist in 2016. Juli is also a Masters Highland Games World Champion and holds three World Records in the Braemar Stone; Heavy Weight for Distance, and Light Weight for Distance in the 45-49 class. Her 5 years of training and coaching under Mark Rippetoe has honed her coaching skills to be a top choice for you to reach your strength and conditioning goals. Juli will strongly encourage tosabarbell athletes to compete (and prepare you to do so.) However; tosabarbell is also for those who just wish to be stronger and go through life feeling better. Matt WanAt is a retired Professional Strongman who competed frequently with Strongman Champions League in Europe. He played a year of D1 football with Iowa before concentrating on his Chemical Engineering degree in Iowa City. He is a native of Wauwatosa and still remains a staunch supporter of Tosa East. This blog will be a mixture of strength notes, coaching and nutrition tips, personal shit; bacon delicacies, and a whole lot of fun.
View all posts by tosabarbell →
This entry was posted in Uncategorized and tagged barbells, Biggest Loser, motivation, strength training. Bookmark the permalink.