I’ve mentioned before that we live right across the street from an elementary school. Since spring is theoretically in the air, the screaming coming from the playground has amp’d up a notch.

Our street gets pretty clogged twice a day. So much so that me getting out of my driveway can get pretty perilous with narrow streets and cars parked along both sides. I’ve even had people park their cars in our driveway, “Only for a minute” until their kid gets out of school. That’s one mistake one red car driving blondie won’t make again.

The narrow mindedness of elementary parents boggle the mind. During the winter, as I’d don the boots and hat to get the sidewalk shoveled in time to make sure the little angels don’t start their school day on their asses, I’d have some parents (who refused to get off their cell phone for two minutes) literally stand impatiently as I’m shoveling with their best Valley Girl “Uhhh, Excusssse me” impression I’d seen in a while.

But the worst of it? This… 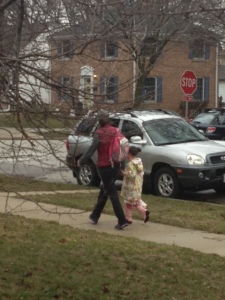 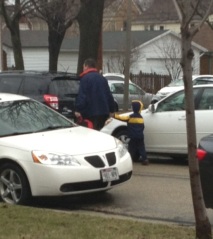 What is it about Wisconsin children that they can’t carry their own backpacks? Since when did that become popular? I can’t remember EVER carrying my kids’ back packs. We’ve even gone through just about every sport imaginable with large, equipment filled bags needed and I still did not even consider carrying them. I absolutely refused to carry hockey bags. Have you seen a goaltender hockey bag? It’s ginormous PLUS pads. But if she wanted to play goalie, she could carry her own stuff. Fact.

What is the lesson parents? You have enough on your plate just walking down a sidewalk, I don’t want to confuse you with carrying a backpack??????? SRSLY? Rain or Sun, Snow or Sleet, let kids know now that they’ll be responsible for their own stuff. And I really don’t want to hear, ‘but sometime’s they’re really heavy!’ So what? These kids are walking half a block. They’ll be ok.

On the flip side, there’s a little girl who walks at least five blocks from the south. She’s awesome. I’m guessing a fifth grader who seems rarely to zip her jacket, never wears a hat, and always walks to school with a determined look on her face. I like this girl, she’ll go places. She’s probably always carried her own backpack. Truth.

Perhaps we have been misguided into taking too much responsibility from our children, leaving them too little room for discovery.

For training opportunities at tosabarbell, call or text Juli at 320-296-9313. jep6095@gmail.com tosabarbell is a private, home grown gym with three lifting platforms; squat rack; prowlers; throwing implements; bars, bumpers and everything else needed for an effective strength and conditioning program. Straightforward barbell programming including the Olympic lifts; sound (read: not fancy bullshit) diet advance for weight gain or loss; and strong coaching will ensure you will meet your goals such as becoming stronger, more explosive, and better conditioned. Juli has been coaching teams and athletes for over 20 years. She grew up participating in various sports at various levels but was always drawn to those that require strength training. She is a 2-time Master's Amercian Weightlifting Champion and holds six Master's American records. She is a Master's Weightlifting National Champion and holds three National records. She is a Master's Weightlifting World Championships Silver Medalist in 2016. Juli is also a Masters Highland Games World Champion and holds three World Records in the Braemar Stone; Heavy Weight for Distance, and Light Weight for Distance in the 45-49 class. Her 5 years of training and coaching under Mark Rippetoe has honed her coaching skills to be a top choice for you to reach your strength and conditioning goals. Juli will strongly encourage tosabarbell athletes to compete (and prepare you to do so.) However; tosabarbell is also for those who just wish to be stronger and go through life feeling better. Matt WanAt is a retired Professional Strongman who competed frequently with Strongman Champions League in Europe. He played a year of D1 football with Iowa before concentrating on his Chemical Engineering degree in Iowa City. He is a native of Wauwatosa and still remains a staunch supporter of Tosa East. This blog will be a mixture of strength notes, coaching and nutrition tips, personal shit; bacon delicacies, and a whole lot of fun.
View all posts by tosabarbell →
This entry was posted in Uncategorized and tagged overbearing parents, strength training, Weak children. Bookmark the permalink.