Bigg and I had an entertaining post-Games road trip conversation on whether or not we would see another Walter Payton come along. See, growing up in Purple and Gold country, we still knew to be amazed by Sweetness and his abilities. Grandpa was a die hard Bears fan, growing up in Chicago, and would love it every time #34 was handed the ball. It was ballet; poetry; a symphony, everything powerful and beautiful wrapped up in 5’10” of speed and strength. I just don’t know. Numbers don’t always speak to the total package of an athlete.

But I’m still a Vikes girl and our Adrian Peterson has done pretty well for himself. He’s matured through the years, seems to have fixed that fumble when you shouldn’t issue… 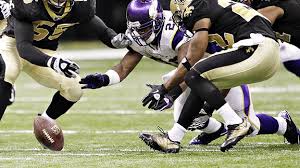 …and rehabbed a knee surgery to come back stronger and better than ever. His vision is magical. He seems to know when and where a hole will appear about an hour before the ball is snapped and when he’s off, see ya! Is he the next Walter Payton? Dunno. I’m pretty partial to both of them and feel secure preserving Payton’s talents in my heart as the best. Time will tell.

The fun part is that on Sunday, Peterson and my Vikes will be at Soldier Field taking on the Bears and we’ll be there! A stop Saturday night to the Purple Pig for some cheese, swine, and wine…

…and off to the game Sunday. I’m ready. I’ve got my purple nails,  purple flower for my hair, and of course my #69 Jared Allen jersey. Sitting in the section where Bear’s season ticket holders have sat for decades in my purple always gets some feedback. Sitting with a 6’4, 360# dude keeps the feedback respectful. Heh. In fact, last year the locals kicked out an obnoxious Bears fan. Class. Srsly.

And you know this post wouldn’t be complete without this…

I want to be remembered like Pete Rose. ‘Charlie Hustle.’ I want people to say, wherever he was, he was always giving it his all.

For training opportunities at tosabarbell, call or text Juli at 320-296-9313. jep6095@gmail.com tosabarbell is a private, home grown gym with three lifting platforms; squat rack; prowlers; throwing implements; bars, bumpers and everything else needed for an effective strength and conditioning program. Straightforward barbell programming including the Olympic lifts; sound (read: not fancy bullshit) diet advance for weight gain or loss; and strong coaching will ensure you will meet your goals such as becoming stronger, more explosive, and better conditioned. Juli has been coaching teams and athletes for over 20 years. She grew up participating in various sports at various levels but was always drawn to those that require strength training. She is a 2-time Master's Amercian Weightlifting Champion and holds six Master's American records. She is a Master's Weightlifting National Champion and holds three National records. She is a Master's Weightlifting World Championships Silver Medalist in 2016. Juli is also a Masters Highland Games World Champion and holds three World Records in the Braemar Stone; Heavy Weight for Distance, and Light Weight for Distance in the 45-49 class. Her 5 years of training and coaching under Mark Rippetoe has honed her coaching skills to be a top choice for you to reach your strength and conditioning goals. Juli will strongly encourage tosabarbell athletes to compete (and prepare you to do so.) However; tosabarbell is also for those who just wish to be stronger and go through life feeling better. Matt WanAt is a retired Professional Strongman who competed frequently with Strongman Champions League in Europe. He played a year of D1 football with Iowa before concentrating on his Chemical Engineering degree in Iowa City. He is a native of Wauwatosa and still remains a staunch supporter of Tosa East. This blog will be a mixture of strength notes, coaching and nutrition tips, personal shit; bacon delicacies, and a whole lot of fun.
View all posts by tosabarbell →
This entry was posted in Uncategorized and tagged Adrian Peterson, Chicago Bears, Minnesota Vikings, Sweetness, tosabarbell, Walter Payton. Bookmark the permalink.