We headed on down to Springfield, Illinois this weekend for the Shamrock Games thrown by Merl Lawless and the Ancient Athletic crew and as before, it was awesome. It’s an indoor games thrown on the State Fairgrounds. Last year I remember how excited I was to be indoors on my first full games, until I realized that the coliseum actually RETAINS the cold. Heh. So I was prepared this year. The fact that it wasn’t snowing on us made my day, the other fact that it was a bit chilly was ok. It wasn’t snowing on us, remember?

Last year’s Shammies fell on my birthday and was the weekend immediately following our trip to Finland. To say we were both tired afterwards was a gross understatement. I remember getting back from Springfield around 11:00pm. We made it out for a birthday drink but were so tired I don’t know that a word was spoken. Heh. This year’s games were a bit different in that Iowan A.D. Mark McVey ran our group tightly and efficiently and we flew through the 8 events in record time. We started promptly at 9:30 and even with a lunch break were done by 2:00. Eight events, lunch, fun girl chatter and STILL finished in minutes over four hours! SRSLY. Last year we were the last to finish, a good hour after everyone else, they were almost done breaking down the field by our last WOB throw. THIS time we were one of the first groups done (we started with Sheaf, that was helpful. I still suck at Sheaf, that was not as helpful) and had at least my first beer done before others started finishing up. It was awesome.

We had a great post games BBQ meal with Jeff Armstrong, Jason Clevenger, and Rhett Bobzien that was filled with so much laughter I thought I gave myself a hernia afterwards. My Bigg man drove all the way home while I slept through most of the trip and by the time we got home and unpacked the gear and the car, still made it to bed at a decent hour. Score!

Anyways. Back to the Games.

Having five events under one roof can be a bit exciting. The heavy hammer was in the middle of the distance trigs so when we were competing on that side you would hear various shouts of, “Hammer ON!” or “Weight ON!” to ensure we didn’t kill each other. As Merl opened the games, he spoke of the new hammer cage that was used at The Arnold and was tested as an errant hammer tried to make it’s way to the crowd. Denied, the cage held. Which is a good thing because as we were out in the Heavy Distance weight field ready to shag a throw, one of the Super A’s let go of the hammer and according to my scientific (and scared shitless) calculations, that thing was heading right for us had that cage not held. Now, it got knocked down and they had to tie it back together, but it held. Thanks gawd. I was appreciative of those shouts, it made us perk up and be ready.

While on the heavy hammer, we had some more. Now the Super A’s were on the WOB and I don’t remember which group was on the Sheaf, right next to the WOB. There were shouts and grunts coming from both sides. My first two throws were ok, not good releases though. I really want to get this Hammer thing down and was fairly determined to have a good 3rd throw. So as I waited for Mark to make his way into a safe position, I was thinking about a few different things when I heard a huge shout and some noise towards the WOB. It was Nathan Parker (an amazing thrower and Arnold Champion) hitting a PR of 15’1″. I kind of heard it but was focused on my throw. I choked up a bit on the handle, put my weight further back towards my heels and put together a pretty decent throw. 57′ and change exceeded my goal and I was very pleased. The thing was, as soon as I released it, I knew it was a good one. Good throws just feel good. I don’t know yet how to explain that. Effortless, I’ve written about that before. Mechanics coming together, it was nice. I looked back, saw where it dropped, and gave a shout of my own. Good throw.

I have a long ways to go with this event but it was a good start. I need more speed but I’m pleased with the swings and release. Something to build on.

It was a great event, with great ladies and awesome prizes… 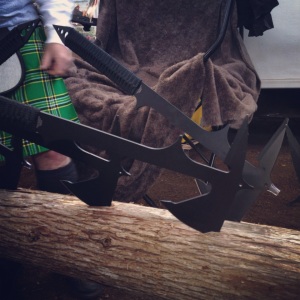 …of which the Oz man has already staked his claim on this one.

I also had a wonderful Birthday the next day and am so thankful and touched at so many who took the time to wish me well. We still get one more birthday dinner tomorrow night at the Milwaukee Ale house for a five course dinner with Milwaukee Brew and Lakefront Brewery beers, sooooooo, awesome! I may shout again at that one, we’ll see.

For training opportunities at tosabarbell, call or text Juli at 320-296-9313. jep6095@gmail.com tosabarbell is a private, home grown gym with three lifting platforms; squat rack; prowlers; throwing implements; bars, bumpers and everything else needed for an effective strength and conditioning program. Straightforward barbell programming including the Olympic lifts; sound (read: not fancy bullshit) diet advance for weight gain or loss; and strong coaching will ensure you will meet your goals such as becoming stronger, more explosive, and better conditioned. Juli has been coaching teams and athletes for over 20 years. She grew up participating in various sports at various levels but was always drawn to those that require strength training. She is a 2-time Master's Amercian Weightlifting Champion and holds six Master's American records. She is a Master's Weightlifting National Champion and holds three National records. She is a Master's Weightlifting World Championships Silver Medalist in 2016. Juli is also a Masters Highland Games World Champion and holds three World Records in the Braemar Stone; Heavy Weight for Distance, and Light Weight for Distance in the 45-49 class. Her 5 years of training and coaching under Mark Rippetoe has honed her coaching skills to be a top choice for you to reach your strength and conditioning goals. Juli will strongly encourage tosabarbell athletes to compete (and prepare you to do so.) However; tosabarbell is also for those who just wish to be stronger and go through life feeling better. Matt WanAt is a retired Professional Strongman who competed frequently with Strongman Champions League in Europe. He played a year of D1 football with Iowa before concentrating on his Chemical Engineering degree in Iowa City. He is a native of Wauwatosa and still remains a staunch supporter of Tosa East. This blog will be a mixture of strength notes, coaching and nutrition tips, personal shit; bacon delicacies, and a whole lot of fun.
View all posts by tosabarbell →
This entry was posted in Uncategorized and tagged Heavy Hammer, Horseshoe Sandwich, Shamrock Highland Games, tosabarbell, William Shakespeare, WOB. Bookmark the permalink.