Without realizing it, I have always been interested in movement. When I was a little girl and my mom would take me to the Nutcracker Ballet each year, as much as I enjoyed the costumes and the characters, I would watch the movement. What was the body doing right before a leap? How did the men seem to be invisible at times while the ballerina was lifted into the air by them? The arms, how did they extend to look as if they reached across the stage? Get the picture?

I suppose it’s why I was attracted to coaching. Well, that and I get to wear sweats and swear a lot. That helps. But watching people move and coaching them through heavy training is satisfying to me. Every time a tweak is made to improve efficiency it is happy. Success. The client feels it and gives them confidence. Fun stuff.

I’ve talked about how, since my move up north, I’ve seen so many more walkers and runners. People in Texas didn’t. It was just too hot. Oh sure you’d see a runner here and there but nothing close to a town with pretty mild weather and a ginormous lake to run next to. And because I’ve always been interested in movement, I am inundated by visions of people who don’t know how to move through space. It is amazing to me that so many in the medical profession support smoking bans to “cut down costs of medical treatment” and then do NOTHING about the complete mess of 80% of the population’s walking gait and how many folks will need surgeries later in life to replace messed up hips and knees. SRSLY.

Knee’s bowed in (Bigg does that sometimes, we’ve talked about it. New knees will be an anniversary gift at some point. Fun.) Shoulders slumped; pelvis’ tilted forward; chest caved in. As an aside, more often than not their face shoved in their phone which is both bringing them off balance AND making them a fucking annoyance. The ponytailed, lateral movement girls are hilarious. Trying to perfect their walk to make their pony tail swish back and forth must be the rage. I’ve never been able to do it. Not to pick on my wonderful hubby too much (too late?) but when he wears my keys around his neck you can hear them go back and forth because he has so much lateral movement to each step. (Please see *annoying as fuck* reference;) Love you hubbby!

Even HE is aware of it now and works on moving forward instead of side to side. Thanks gawds.

And the runners? OY VEY! The runners. What a complete disaster. Now, I have always loved to watch sprinters. They race on and around the track as if they’re on air. I’ve never understood it. I’ve never been able to do it. Never. I remember elementary school track and field days where I would run. I had about 30 meters in me before I petered out. But for those 30 meters? I soared like a brontosaurus. SRSLY. I felt like I could feel the earth move under my feet. Not because I’m awesome, but because each step was like Optimus Prime. Dance classes helped and I did ok because I have enough athletic ability to get through it. But “Juli” and “Light on her feet” has never been uttered in the spans of time. True story.

So watching these sprinters on the tele was the only way I could imagine moving like that. Smooth, strong, fast. Each step propelling them forward at record speeds. Compare that to the rediculousness I see on a daily basis. People running while each step propels them UP instead of forward. Incredibly overweight folks running cuz they decided to get “healthy” until their joints hurt so bad that they stop and remain overweight. The pony tail swishers. Heel strikers (hey, how’s that planter fasciitis treating you?) More knee’s bowed in, only this time with speed. (I pity the running fool who complains about their sore knees around me again.) Skimpy shorts and sports bras on girls who should NOT be wearing skimpy shorts, sports bras, AND running in public. Hey! Spandex isn’t for everyone you know! (FTR, If the chick rocks the spandex and sports bra…have at it. Far be it for me to deny the males of the world some eye candy when I so dearly appreciate a pair of well worn ranger panties.)

And for the record, I don’t like watching marathon runners. That’s not fun for me. Cuz this… 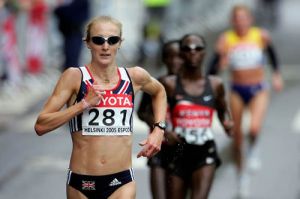 …just reminds me of all the starving people in the world. Really. I’m not being glib. I understand people like to run and some run marathons and ultra marathons. But they look pained and malnourished, not strong and powerful. And, ya know, we like strong and powerful around here. So I don’t want to hear from you runners. You’d get a lot more support out of me if you’d just squat once in a while.

Take a look at yourself. How do you walk? It’s important. It could help figure out knee or hip or back pain. Yup, it’s that simple. Pay attention to others. What do you see? And if you see a 350# bearded giant coming towards you with keys around his neck that are swinging back and forth, give him a “forward” cue so he stops it. Heeeheee.

I’m going to work like it’s a pure guts race at the end, and if it is, I am the only one who can win it.

For training opportunities at tosabarbell, call or text Juli at 320-296-9313. jep6095@gmail.com tosabarbell is a private, home grown gym with three lifting platforms; squat rack; prowlers; throwing implements; bars, bumpers and everything else needed for an effective strength and conditioning program. Straightforward barbell programming including the Olympic lifts; sound (read: not fancy bullshit) diet advance for weight gain or loss; and strong coaching will ensure you will meet your goals such as becoming stronger, more explosive, and better conditioned. Juli has been coaching teams and athletes for over 20 years. She grew up participating in various sports at various levels but was always drawn to those that require strength training. She is a 2-time Master's Amercian Weightlifting Champion and holds six Master's American records. She is a Master's Weightlifting National Champion and holds three National records. She is a Master's Weightlifting World Championships Silver Medalist in 2016. Juli is also a Masters Highland Games World Champion and holds three World Records in the Braemar Stone; Heavy Weight for Distance, and Light Weight for Distance in the 45-49 class. Her 5 years of training and coaching under Mark Rippetoe has honed her coaching skills to be a top choice for you to reach your strength and conditioning goals. Juli will strongly encourage tosabarbell athletes to compete (and prepare you to do so.) However; tosabarbell is also for those who just wish to be stronger and go through life feeling better. Matt WanAt is a retired Professional Strongman who competed frequently with Strongman Champions League in Europe. He played a year of D1 football with Iowa before concentrating on his Chemical Engineering degree in Iowa City. He is a native of Wauwatosa and still remains a staunch supporter of Tosa East. This blog will be a mixture of strength notes, coaching and nutrition tips, personal shit; bacon delicacies, and a whole lot of fun.
View all posts by tosabarbell →
This entry was posted in Uncategorized and tagged Florence Griffith Joyner, Running, Running makes me tired, squats, Steve Prefontaine. Bookmark the permalink.