Posted on October 2, 2013 by tosabarbell 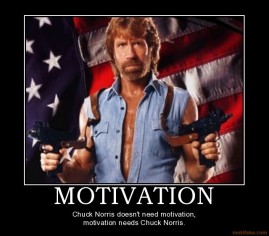 I was asked an interesting question last week during a training session. We were talking about the silliness of globo gyms but also how the social aspect of a gym can be nice when out of the blue, I’m asked if seeing really fit women at the gym are a motivator for me?

Huh. I’ve never thought of it before. First off, “fit” has evolved into a bastardized term. It has been thrown around so often in so many different groups that it has ceased to have real meaning. If you are a marathon runner, are you fit? If you are the Strongest man in the world, are you fit? If you do high intensity workouts 7 days a week and have dieted down to the extreme that you no longer get your periods but look awesome in lululemon’s, are you fit? See? Fit means shit. And in all actuality, it’s been a long time since I’ve seen someone even resembling “fit” in a globo gym.

Of course my answer was quick, what other people do or look like does not motivate me. I want to be as strong as I can, as conditioned as I can, and in the case of the fringe sport I’m participating in, I want to be the best that I can. Once I start comparing myself to others, I dismiss all the hard work I’m doing to be a better me. Nope. Not going there. To chase someone else’s journey puts me in immediate failsville. I could say I wish I threw the hammer further (hate that thing) but to say I wish I threw the hammer further like Kristi Scott? Uhhhhh, not gonna happen. I just put myself in the “can’t” column which means I’ve failed before I even stepped into the circle. No thanks. Now, I WHILL say that I wish I threw the hammer with Kristi’s smooth technique. That’s something I can actively pursue, better mechanics. Improving the mechanics of all the Games events to throw further is a great motivator, because it will directly impact me.

Something else occurred to me on Saturday regarding motivation. We took in the nephew’s soccer game, Oz’s football game, and back to the nephew’s flag football game all in one gorgeous fall morning. We were visitors at Oscar’s game so we got the old, run down, rickity bleachers. That’s fine, whatev. I hate bleachers to begin with and no matter how nice they are have about a 12 minute time limit before my back is hurting and no, it’s not an age thing, I’ve always hated them. But I was in near panic attack mode on Saturday when many of the Grandma and Grandpa’s were navigating the wide, high steps. There were so many near tumbles that I pictured aged bodies strewn all over all crying, “I’ve fallen and I can’t get up!” Stressful.

At the flag football game, there were at least two instances where a grandma was stuck in one of those portable lawn chairs that fold up and don’t have a hard back. They didn’t have enough strength to push up and allow the person on each side to pull them up. Yikes. Motivator number one. Barring a catastrophic accident, I never want to be so weak that I can’t get out of a chair…unless I’m like, 104 and my 80 year old twins put me in one of those stupid portable lawn chairs for their own entertainment to see me try to wiggle my way out of there.

I guess I’ve always been a self motivator, that’s a plus AND a minus. A minus in when I’m not motivated, I don’t look outside for other circumstances or people to put that spark back in me. Also, when I begin to get unmotivated and I have someone or something adding negative influence, I completely withdraw. I’ve worked for boss’ before who believed that public humiliation or screaming would motivate me to do better. Nope. Done. Not only am I not motivated, I’m on my way out no matter how long it takes to get there. I’ve learned the hard way that I don’t do well in those circumstances. Being a self motivator is a plus in many circumstances though and I’m thankful for it. When I stumble, I know I’m almost on the right track and can adjust to get there quickly (see Gut Check.) I can stay focused on what works for me and not be swayed by others and program jump every 8 weeks trying out the new big thing. (By the way? Nothing is new in the strength world.) I can (mostly) stay positive and believe in the hard work I put in the gym and in practice to know it will  pay off in some way in the future.

And I’ll climb those rickity bleachers, for as long as I can.

On that note, here’s some major inspiration…

Every strike brings me closer to the next home run.

For training opportunities at tosabarbell, call or text Juli at 320-296-9313. jep6095@gmail.com tosabarbell is a private, home grown gym with three lifting platforms; squat rack; prowlers; throwing implements; bars, bumpers and everything else needed for an effective strength and conditioning program. Straightforward barbell programming including the Olympic lifts; sound (read: not fancy bullshit) diet advance for weight gain or loss; and strong coaching will ensure you will meet your goals such as becoming stronger, more explosive, and better conditioned. Juli has been coaching teams and athletes for over 20 years. She grew up participating in various sports at various levels but was always drawn to those that require strength training. She is a 2-time Master's Amercian Weightlifting Champion and holds six Master's American records. She is a Master's Weightlifting National Champion and holds three National records. She is a Master's Weightlifting World Championships Silver Medalist in 2016. Juli is also a Masters Highland Games World Champion and holds three World Records in the Braemar Stone; Heavy Weight for Distance, and Light Weight for Distance in the 45-49 class. Her 5 years of training and coaching under Mark Rippetoe has honed her coaching skills to be a top choice for you to reach your strength and conditioning goals. Juli will strongly encourage tosabarbell athletes to compete (and prepare you to do so.) However; tosabarbell is also for those who just wish to be stronger and go through life feeling better. Matt WanAt is a retired Professional Strongman who competed frequently with Strongman Champions League in Europe. He played a year of D1 football with Iowa before concentrating on his Chemical Engineering degree in Iowa City. He is a native of Wauwatosa and still remains a staunch supporter of Tosa East. This blog will be a mixture of strength notes, coaching and nutrition tips, personal shit; bacon delicacies, and a whole lot of fun.
View all posts by tosabarbell →
This entry was posted in Uncategorized and tagged Babe Ruth, Milwaukee Weightlifting, motivation, Positive Motivation, Self Motivation, tosabarbell. Bookmark the permalink.