Over the years, I’ve trained a few folks who fall under the “morbidly obese” category. Most of us have. Which is why we understand that when a person’s weight gets out of control, it has very little to do with “choices” and more to do with how a person feels about themselves. (Yes, we’ve come into the age where the obese get to shout from the rooftops that they actually feel quite good about themselves and people better just love them as they are and we all say, ‘you go girl.’ I don’t. Because I think they’re full of shit. They’ve admitted that they’re unhealthy; that shitty food makes them happy, and that they’re just waiting for that one person who accepts them for who they are which is really quite easy if you just troll the Dunkin Donuts line each morning.)

Anyways. One particular client of mine had a lot of weight to lose. A lot. She was probably about 130 pounds overweight (overweight is subjective, fuck the BMI. A healthy weight with muscle mass is dependent on the person. This isn’t the Biggest fucking  Loser after all, it’s real life.) We worked together for almost a year before we had to part ways. At the end of the day, I can’t take money from someone month after month for just showing up. That’s how I roll. I’d be richer if I could. I’ve heard other coaches/trainers say it, ‘Dude, who cares what they do in the real world, they just show up a couple times a week and pay me. Rad.’ I can’t.

One of the worst things that could’ve happened to this particular client was that she lost 100 pounds 10 years ago. Looked great; felt great, one of her happiest times. Then it came back, with friends. It took about six months. But byGods she knew that if she really wanted to, she could lose 100 pounds again. Except that she couldn’t. And I couldn’t reach her to just start with five pounds. Let’s take three weeks and lose five pounds. And then another week or two for another 3-5 pounds. Let’s just take this one pound at a time. Nope, when she was ready (she said), she’ll just lose 100 pounds again.

It was heartbreaking. When I work with someone, I’m all in. I’m not a WAC trainer, after all.

Holley Mangold posted on her InstaGram this past weekend that she’s finally accepted that she needs help with her weight. That she’s still recovering from the Biggest Loser and  has used food for more than just fuel. That’s big. Because, to my knowledge, Mrs (she got married a couple weeks ago) Mangold has been very public on how she LOVES to be a big girl. LOVES it. But really not really.

There are many of us who train hard and have athletic goals. So much so that the “and need to lose some weight” dealio gets pushed to the back of the line. Even losing 5-10 pounds off a needed 30 is a a huge victory. But it always starts with one. One pound, probably water weight, but it’s one less than yesterday. And then you shoot for two. And so on. And so on.

Don’t wait for the magical day where 100 pounds will disappear, it doesn’t exist. Start today.

I’ve said it before and I’ll say it again, I have no idea why people post lifting videos and then lie about how much weight they’re “lifting.” I don’t get it. Who cares? A 135 pound deadlift is awesome, if that’s what you can do today?!?! Why lie?

But there’s been another rash of videos where the stated weight is quite inflated. Now, sometimes that’s not the lifters fault. There was one video of an Olympic hopeful that had been shared where the person who re-posted it got the weights wrong. (Srsly dude, RED=25kg/BLUE=20kg/YELLOW=15kg/GREEN=10kg. Just add the colors. This isn’t hard and I think almost all math is hard.) 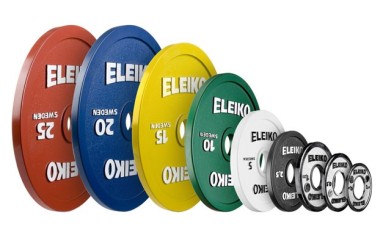 I imagine your need to impress takes priority over that pesky ‘honesty’ and ‘integrity’ thing and HEY! That’s okay! You go girl. But people can add shit up, quickly, and we know you’re lying. We don’t care. But we know.

Why bother? Lift the weight you can today, that’s awesome. That’s all any of us do. Some days it’s more, some days it’s less. But we’re there, putting in the work. That’s the important part.

Quite honestly, it’s likely I’ll never squat over 160kg. I’d have to train for it and I’m pretty busy training for two different world championships this year neither of which is a squat world championship. I have finite abilities to recover and lifting hard saps my resources. Most importantly; however; is that I don’t care. It’s not the tiger I have my eye on. It’d be cool, sure. Maybe people would take me more seriously as an athlete (heh.) But I have to respect my goals and more importantly, my age and ability.

So if I can walk in the gym and hit a 130kg squat without too much trouble, I’m happy with that. Sure I’d LOVE to be stronger. But I got work to do and squatting or pulling in the PR zone week after week means I do nothing else. So last week I hit one at 105kg and headed out to throw.

Completely unimpressive, eh? Here’s a picture of all the fucks I give:

Be proud of yourself for the efforts you give. Don’t lie about how much you’re lifting. It makes you look silly and it diminishes the actual work you’re doing.

Plus, ya know, pussy.

…are still cookies. If you’re a phat, you can’t eat that.

Years ago, my cousin Denise started a gluten-free baking business. She had spent almost two years sick and tired and finally tried a gluten-free diet and has never been sick again (at least with that belly stuff.) She’s strong and awesome and I’m happy that she’s happy and healthy.

Each time I’d visit her house in Woodinville, WA she’d serve up some baked goods that she’d been working on perfecting. I’d take a taste and say, ‘yup.’ But I only got a taste, cuz I’m a phat. And I don’t get cookies. At least, not cookie after cookie.

Fucking duh. I’ve actually known people who are visibly bloated and inflamed and shout from the rooftops that they’re eating Paleo and they’re SO much healthier.

Ummmm, no. That’s not even remotely how it works. Even the IIFYM crowd admit that they eat clean the majority of the time and use shit here and there for a quick fix.

Anyway, don’t play that shit where you make me drag your words outta you. Declare, or shut the fuck up.

For training opportunities at tosabarbell, call or text Juli at 320-296-9313. jep6095@gmail.com tosabarbell is a private, home grown gym with three lifting platforms; squat rack; prowlers; throwing implements; bars, bumpers and everything else needed for an effective strength and conditioning program. Straightforward barbell programming including the Olympic lifts; sound (read: not fancy bullshit) diet advance for weight gain or loss; and strong coaching will ensure you will meet your goals such as becoming stronger, more explosive, and better conditioned. Juli has been coaching teams and athletes for over 20 years. She grew up participating in various sports at various levels but was always drawn to those that require strength training. She is a 2-time Master's Amercian Weightlifting Champion and holds six Master's American records. She is a Master's Weightlifting National Champion and holds three National records. She is a Master's Weightlifting World Championships Silver Medalist in 2016. Juli is also a Masters Highland Games World Champion and holds three World Records in the Braemar Stone; Heavy Weight for Distance, and Light Weight for Distance in the 45-49 class. Her 5 years of training and coaching under Mark Rippetoe has honed her coaching skills to be a top choice for you to reach your strength and conditioning goals. Juli will strongly encourage tosabarbell athletes to compete (and prepare you to do so.) However; tosabarbell is also for those who just wish to be stronger and go through life feeling better. Matt WanAt is a retired Professional Strongman who competed frequently with Strongman Champions League in Europe. He played a year of D1 football with Iowa before concentrating on his Chemical Engineering degree in Iowa City. He is a native of Wauwatosa and still remains a staunch supporter of Tosa East. This blog will be a mixture of strength notes, coaching and nutrition tips, personal shit; bacon delicacies, and a whole lot of fun.
View all posts by tosabarbell →
This entry was posted in Uncategorized and tagged Cookies, Highland Games, Holley Mangold, Morbidly obese, Olympic Trials, Paleo diet, strength training, tosabarbell, Weight loss, weightlifting. Bookmark the permalink.