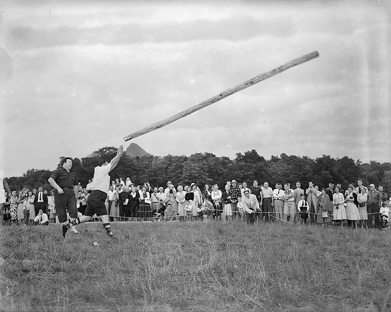 Caber toss at the first ever Grandfather Mountain Highland Games.

I haven’t thrown; thought about throwing; drilled; thought about drilling, or even touched a throwing implement to get it out of my way since August in Buffalo. Nearly 4 months now. Man, has it been nice.

I was burned out. I’ve pushed hard these last four years including off season strength training along with drilling and just for fun, last year I added Weightlifting goals in the mix. While I nearly accomplished all of my goals for the year, I’m tired; overweight, and my hormones are a mess from two years of 10×10’s and training 4-5 days a week (not to mention just being a woman in her late 40’s.)

While I’ve had to continue to focus on my Weightlifting longer, I was healing up my hamstring injury from Master’s Worlds and trying to stay recovered and as uninflamed as possible. And I may not be done yet. I have registered for Master’s Nationals Weightlifting meet next March and, since I bombed out at American Championships earlier this month, may need to do another local meet if my total from Master’s World Championships does not qualify as a USA Weightlifting sanctioned meet. (Yes, it “should” which is the answer I keep getting from everyone EXCEPT the powers that be. I’ve written no less than 5 emails and left phone messages and still haven’t received an answer. At this time, I’m registered for a local meet in Aurora, IL in a couple of weeks and if a 106kg total is all I need, it’s all I’ll go for. I think Matt and I worked out that my 2nd snatch warm-up will be my opener and my 3rd clean and jerk warm-up will be go time for that lift. While I’m annoyed that no one has gotten back to me, I’ll play the game and just qualify to be safe.) But in no way whatsoever will I push my lifts at the meet.

And I’m getting antsy to throw again. I’m also getting pretty excited to start working towards a new set of goals. See, last year I wanted to throw far. I knew my mechanics still weren’t where they needed to be which means I needed to be as strong and powerful as I could be to hang. This year? Mechanics. All mechanics.

I received an effective drill for Hammers from Chuck Kasson at Enumclaw that I played with a little bit and started to feel the hammer in motion. But Worlds was two or three weeks later and after that I was done. I want to go back to those drills, and only those drills,  and assuming it’s not arctic outside I can do that. I want to take the time to just move and feel. I want to become friends with the Hammer in 2017 and stop fighting with it. That means sessions dedicated only to Hammers instead of a few throws at the end of practice where I’m already tired. 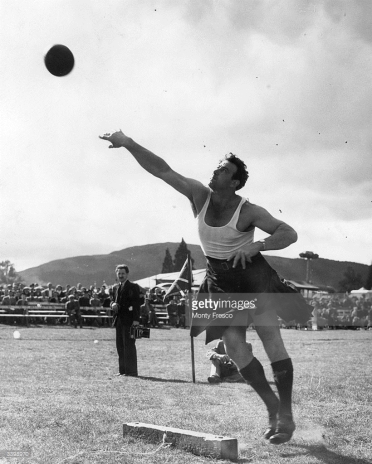 Ok, I lied. I played with an implement or two in Germany with Petra and Uli and their throws group. It was tons of fun but I had just lifted the day before and PR’d my Clean and Jerk by 4kg which was pretty awesome but I was feeling it the next day. One of my goals; however; was to get some stones drills from Uli. I grabbed the children’s stone and he gave me three drills revolving around getting my right hip turned to the field prior to the throw. I haven’t got this down yet and when I see people do it or photo’s like the above, it makes sense to me. Luckily, I can run these drills inside at a local gym where fellow throwers Ross & Victoria Bunchek built a contraption we can throw into. It’s pretty awesome and I’m very thankful to them for letting others play in their sandbox. Right hip turn and jump. That will be month one. Yes, there’s more to it than that but first things first.

While I do well at Weights, I believe there’s more there. I’m not hitting the positions as clean as I can and actually need to slow things down to feel them. One of the worst cues to give me is to “power” or “sprint” after the fist turn. Because I’ll do it and in the process not only completely blow through any useful positions to set up a big toss, but probably power right through the toe board and foul the throw. I have in my head what that looks like, now I just need to make my body do it. Also, I’m still dealing with this hamstring. We went Turkey bowling last week and I had to be very careful on those releases. Snatch pulls are helping give it a nice big stretch but I need to watch it.

And I’m still lifting. And hitting some cardio and hot yoga each week. OH! As if that’s not enough, I registered for next March’s meet as a 90kg lifter. I weighed in at 103 at the last meet. 13 kilos and probably another one or two for insurance. And while I had made progress the last few weeks, Thanksgiving sugar pretty much took care of that. Heh.

As for my lifting, I’m only doing accessory pulls to work on weak points of my lifts while trying to recover from the year but it’s still stress and I need to be very careful about it all. I’m no longer working with Mike Westerling so am on my own. I’ll always be thankful to Mike for not only his help but all of his encouragement this last year. But I was a weightlifter/thrower with a very aggressive schedule and a Masters woman at that so there was a lot of trial and error throughout the year and often times I was still under recovered and both my throws and my lifts showed it. I don’t know exactly what my programming will look like for 2017, right now I’m just taking it one week at a time and it’s likely I’ll stay with that model for the rest of the year.

And 2017 is my 50  year. I can’t wait! But what that means is that I have to be more disciplined than EVER to promote recovery and keep inflammation as low as possible. Food; sleep; keeping sessions efficient but watching the volume and intensity and always, my wine. I really like having a glass at night. But then the bottle is open and what am I gonna do, let it go bad?

The good news is that our throwing schedule for 2017 is quite different than it has been in past years. Right now, the only Games we have planned are the local ‘Tosa Games the first weekend in June and Iceland towards the end of June. We’ll try to hit Minnesota again in early July and assuming I’m on the ball this year with registration, will make our trek out west this year for Portland. We’re going to skip Enumclaw. As much fun as we’ve had the last three years and family time is so precious, we want to leave the funds and time open for a new Games somewhere. Maybe the Southeast or California. There’s good beer on both coasts so getting Matt to either won’t be a problem. Heh. We’ll go from there but it’s a good start and having extra time to work the basics mean I can be smart about it all.

I value self-discipline, but creating systems that make it next to impossible to misbehave is more reliable than self-control.

For training opportunities at tosabarbell, call or text Juli at 320-296-9313. jep6095@gmail.com tosabarbell is a private, home grown gym with three lifting platforms; squat rack; prowlers; throwing implements; bars, bumpers and everything else needed for an effective strength and conditioning program. Straightforward barbell programming including the Olympic lifts; sound (read: not fancy bullshit) diet advance for weight gain or loss; and strong coaching will ensure you will meet your goals such as becoming stronger, more explosive, and better conditioned. Juli has been coaching teams and athletes for over 20 years. She grew up participating in various sports at various levels but was always drawn to those that require strength training. She is a 2-time Master's Amercian Weightlifting Champion and holds six Master's American records. She is a Master's Weightlifting National Champion and holds three National records. She is a Master's Weightlifting World Championships Silver Medalist in 2016. Juli is also a Masters Highland Games World Champion and holds three World Records in the Braemar Stone; Heavy Weight for Distance, and Light Weight for Distance in the 45-49 class. Her 5 years of training and coaching under Mark Rippetoe has honed her coaching skills to be a top choice for you to reach your strength and conditioning goals. Juli will strongly encourage tosabarbell athletes to compete (and prepare you to do so.) However; tosabarbell is also for those who just wish to be stronger and go through life feeling better. Matt WanAt is a retired Professional Strongman who competed frequently with Strongman Champions League in Europe. He played a year of D1 football with Iowa before concentrating on his Chemical Engineering degree in Iowa City. He is a native of Wauwatosa and still remains a staunch supporter of Tosa East. This blog will be a mixture of strength notes, coaching and nutrition tips, personal shit; bacon delicacies, and a whole lot of fun.
View all posts by tosabarbell →
This entry was posted in Uncategorized and tagged Highland Games, Iceland, Master's Weightlifting, NASGA, Scottish Highland Games, USA Weightlifting, weightlifting. Bookmark the permalink.